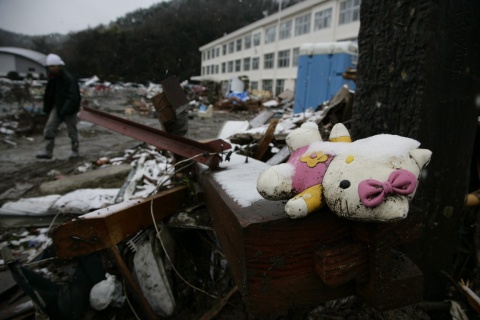 A handout made availabe by internationally active NGO Save the Children on 20 March 20111 shows a school in the remains of Nobiru, Japan on 16 March 2011, days after being devastated by two tsunami waves. EPA/BGNES

A strong earthquake aftershock rocked northeastern Japan on late Sunday evening, seismologists said, but there were no immediate reports of damage or casualties.

According to the Japan Meteorological Agency cited by Channel 6 News, NY, the earthquake had a magnitude of 5.8 on the Richter Scale.

Its epicenter was 90 km southeast of Morioka, the capital of the Iwate prefecture, in the northeastern part of the Honshu island, close to areas affected by last week's 9.0-earthquake and the ensuing tsunami.

The United States Geological Survey (USGS) measured the strength of the earthquake at 6.1 on the Richter scale, considerably stronger than Japan's estimate. The USGS estimated that some 604,000 people may have felt moderate to strong shaking.

Japan is on the so-called 'Pacific Ring of Fire', an arc of fault lines circling the Pacific Basin that is prone to frequent and large earthquakes. Volcanic eruptions also occur frequently in the region.

Most recently, on March 11, an enormous 9.0-magnitude earthquake struck off the coast of northeastern Japan, generating a large tsunami. The earthquake and a resulting tsunami left more than 8 000 people killed and more than 13 000 others remain missing.

Channel 6 News reminds that on December 26, 2004, one of the most powerful earthquakes ever recorded struck off the west coast of Sumatra. The 9.1-magnitude earthquake unleashed a deadly tsunami, striking scores of countries. In all, at least 227,898 people were killed.