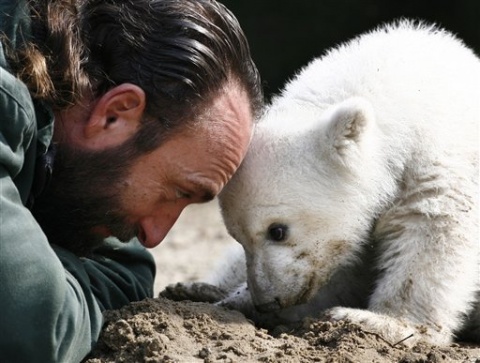 In this March 23, 2007 file photo, Knut, the polar bear cub, has its first public appearance with his keeper Thomas Doerflein in the Berlin zoo.

Knut, the polar bear at the Berlin Zoo, who has been adored by millions around the world, has been found dead,  the DPA newswire reported.

The four-year-old polar bear collapsed and died this morning in his pen, the newswire reported zoo official Heiner Kloes as saying.

Knut, who was the only polar bear ever raised by humans, was found floating in the water in his cage.

Kloes said the zoo aims to carry out an autopsy on the bear to find out the cause of his death.

Knut was hand-reared, notably by keeper Thomas Doerflein, after being abandoned by his mother. He drew 3.2 million visitors to the zoo, an incorporated company, in 2007 and appeared on the cover of Vanity Fair magazine. Doerflein died in 2008 aged 44.