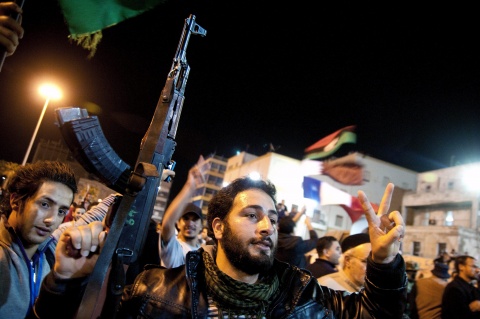 A Libyan rebel flashes a victory sign and holds his gun as people celebrate after the United Nations Security Council had authorized a no-fly zone over Libya, at the seat of the provisional National Council in Benghazi, east Libya. Photo by EPA/BGNES

Rebels in Libya have slammed as "lies" the government's assurances of an immediate ceasefire following a UN Security Council resolution, which backed "all necessary measures" short of occupation to protect civilians in the country.

"This is false news. They are lying. Gaddafi lies about everything," Abdul Basit, a rebel spokesman said.

"The dictator is telling lies to the whole international community and is trying to win time, to turn the situation in his favor," he said.

Rebels said government forces had been bombarding cities in the western part of the country and there are unconfirmed claims that this has continued despite the ceasefire announcement.

Libya's government declared an immediate ceasefire on Friday after a UN Security Council resolution backed "all necessary measures" short of occupation to protect civilians in the country.

UN Security Council Resolution 1973 gave broad backing to taking military action against all threats to civilians, which could include bombing Col Gaddafi's forces on the ground if necessary.