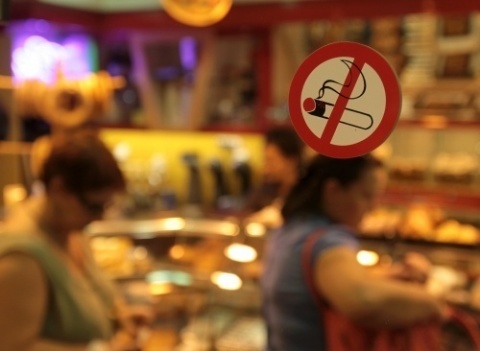 The Health Ministry will increase the checks on whether smoking restrictions are followed in public spaces. Photo by EPA/BGNES

The Bulgarian Health Ministry has announced it will increase the checks for smoking in public places after 5 pm and on holidays.

The reason for the increased checks are signals from citizens that the rules for smoking in bars, restaurants and coffee shops are not followed strictly in the late hours of the day.

According to the restrictions, which entered into effect on December 19, 2010, owners of restaurants, bars and coffee shops have to provide walls, tight-closing doors and good ventilation equipment.

The requirements affect all smoking spaces inside commercial and administrative buildings, railroad stations and airports as well.

Owners of coffee shops and restaurants with less than 50 square meters have the right to decide whether smoking would be allowed. In case smoking is allowed, individuals under the age of 18 would not be admitted as they are banned from smoking in all indoors spaces.

In night clubs, smoking is allowed at all times regardless of how large they are.

At the beginning of March, the Health Ministry announced that advertisement of tobacco products in Bulgaria will be strongly restricted, according to the new National Program for Limiting Smoking in 2011-2015.

Effective 2011, there will be a ban on the production of any items such as toys or food resembling cigarettes and other tobacco products.

In 2013, there will be a ban on all forms of direct and indirect tobaccoadvertisement, such as displaying cigarettes and images of them in stores while the sale of tobacco products will be limited to specialized stores only. The same year, measures will be applied to restrict the showing of people smoking in Bulgarian movies, TV series and various broadcasts.

Cigarette manufacturers will be mandated to account for the exact amount of funds used for advertisement, and will not be allowed to sponsor social events. The program will also ban the use of additives aiming at improving the aroma and the taste of cigarettes.

The full ban on smoking in indoor public spaces legislation will be ready by 2012 with the goal to reduce passive smoking as well. Other measures include keeping high cigarette prices and campaigns to teach about the harmful effects of smoking.