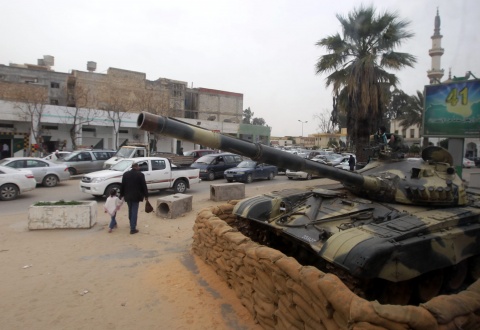 Libya's opposition rebels have declared they will fight the regime of dictator Muammar Gaddafi to the end even if the regime forces take their capital Benghazi.

As the forces of the Gaddafi regime are pushing further into eastern Libya and the rebel's stronghold Benghazi is under threat.

"We are going to fight the dictator Gaddaif with all we have even if he wins the war. But his victory is very unlikely," Ahmed Jibril, a representative of the rebels, is quoted as saying by international media.

On Wednesday, Seif Al-Islam Gaddafi, the oldest son of the Libyan dictator, declared that Benghazi will fall within 48 hours.

Meanwhile, the Gaddafi force captured from the rebels the city of Ajdabiyah; thus, Benghazi remains the last fortress of the opposition.

Government forces captured Ajdabiyah located 150 km south of Benghazi on the Gulf of Sirte only after resilient resistance by the rebels.

Various reports said that the rebels continue to hold parts of the city of Ajdabiyah but those have not been confirmed.

Accounts by rebel representatives claim that the supply lines of the Gaddafi loyalists are stretched, which should allow the rebels to stall their advance.