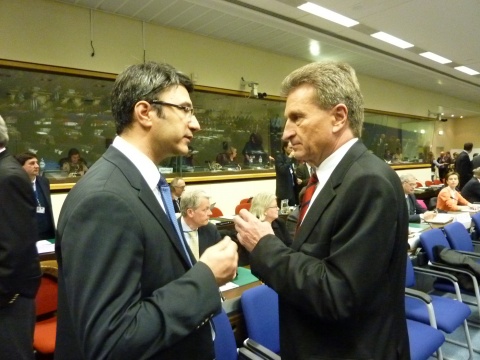 The European Commission has confirmed that it will reexamine the project for a second Bulgarian nuclear power plant in Belene amidst growing safety concerns generated by the crisis in Japan's Fukushima NPP.

Even though the EC issued an approval for the Belene NPP back in 2007, on Tuesday EU Commissioner for Energy Gunther Oettinger declared that Bulgaria's project to build a second nuclear power plant, the Belene NPP, must be re-examined.

His spokesperson Marlene Holzner confirmed and elaborated his statement on Wednesday by making it clear that the EC will re-inspect the Belene project as soon as Bulgaria finds a new strategic investor – a search that has been going on since the fall of 2009 when German energy giant RWE decided to quit it.

The confirmation that the EC will have to approve Bulgaria's Belene project anew comes just as Russian state nuclear corporation Rosatom gave an ultimatum to Bulgaria to reach an agreement on the construction of the plant by the end of March and firmly demanded a price of no less than EUR 6.3 B - while reports suggest Bulgaria is asking for as little as EUR 5 B.

"It is true that the EC has already issued a positive position on the Belene project but right now we are in a situation in which it will not continue because there is no investor, and we need a partner with whom we can have a dialogue," Holzner said as cited by the Bulgarian National Radio.

She made it clear that as soon as Bulgaria finds an investor in Belene, the Commission will issue a new position on the project, and will then observe if its recommendations are met.

When asked if the EC can revoke the go-ahead it has already given to Belene, Holzner said that the Commission will have to reconsider the 2007 position anyway because the plans of the new investor will be different.

EU Commissioner Oettinger's statement on Belene came in an interview for the German "Deutschlandfunk" radio as cited by Russian news agency ITAR-TASS as Japan continues to be struggling with damages caused to some of its nuclear facilities by the recent devastating earthquake and tsunami, which has led the EU to start reconsidering its own policies on nuclear energy.

The EU Commissioner said Belene needs additional technological and geological safety studies all along with its questionable financing regardless of the fact that the European Commission already granted an approval for the construction of the Belene Nuclear Power Plant as early as 2008.

Bulgaria has been unable so far to find European investors for the NPP project while Russia is interested in building it. EU energy ministers gathered in Brussels Tuesday in an emergency meeting in the wake of the nuclear crisis in Japan, and agreed to stress-test all NPPs operating in the Union.

Bulgarian Economy and Energy Minister Traicho Traikov met Tuesday in Brussels with EU Commissioner Gunther Oettinger but his only comments after the meeting have been focused on the important of nuclear safety; he has not expressed any concerns over the declaration of the EC that it will have to reexamine the Belene project.

In November, shortly after a visit to Sofia by Russian PM Putin, Bulgaria's National Electric Company NEK and Russian state company Rosatom signed a memorandum providing for a final fixed price for the two reactors of EUR 6.298 B.

This sum is still not final since the document is not binding; a final binding agreement for the establishing of a joint company for Belene was expected to emerge in 4-5 months, according to Rosatom head Sergey Kirienko, who was in Sofia to sign the document. Five months later Kirienko's prediction about a final agreement has failed to materialize.

The other non-binding documents on Belene signed at the same time provided for participation in the project of Finnish company Fortum with a share of 1%, and of French company Altran Technologies with a share of 1%-25%. NEK is to keep a majority share of 51%, while Rosatom is also expected to have a share of 25%. Serbia has expressed interest in acquiring a share of 5%-10% but the talks for that have not been finalized yet.

In February 2011, Bulgarian PM Borisov had a meeting with the CEO of French holding Areva over Belene but it is still unclear if Areva will seek a share.