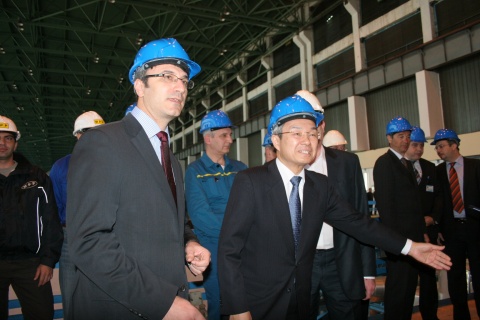 Traikov was in the state-owned Maritsa East 2 plant on Monday with Japanese Ambassador to Bulgaria Makoto Ito where the two of them opened the rehabilitated unit 8 of the TPP, whose repairs were completed by Toshiba 32 days ahead of schedule. The life of the unit has been extended by 25 years.

He pointed out that the possibility to have Toshiba build two new units in the Maritsa East TPP with a combined capacity of 500 MW is "very attractive".

If realized, this would be Toshiba's second investment in Bulgaria's energy sector after at the end of January the Japanese corporation announced a project to invest EUR 37.6 M in a 10-MW solar park near Yambol during the visit of a Bulgarian state delegation in Japan.

Toshiba is also the main investor in the American energy giant Westinghouse, which has recently confirmed its interest in investments in the Bulgarian nuclear power plant Kozloduy.

There are several possibilities for investments in new coal-fired units in Bulgaria's Maritsa East TPP complex. According to Traikov, if the Toshiba investment is in the Maritsa East 2 TPP, it will be providing electricity at the lowest possible TPP price in Bulgaria.