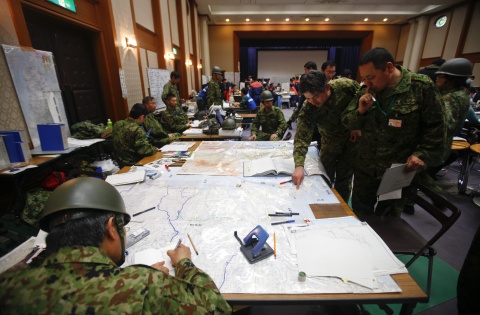 Army officers work inside the control and planning center for search and rescue at the Miyagi Prefecture building, Sendai, Japan, 14 March 2011. EPA/BGNES

A total of 2 414 people have lost their lives as a result of the devastating earthquake in Japan and the ensuing tsunami, according to the Japanese police.

According to the head of the police in the Miyagi prefecture, which is one of the most badly affected areas of the country, the death could climb to 10 000 as the chances to recover survivors from the rubble are waning.

The strongest earthquake in Japan's history that hit the country on Friday had a magnitude of 9.0 on the Richter scale.

One of the gravest problems that Japan still faces after the earthquake and the tsunami is the situation with several nuclear facities including the nuclear power plants in Onagawa and Tokai but most importantly in Fukushima where all three reactors have suffered explosions in four days and fears of a radiation disaster continue to climb.