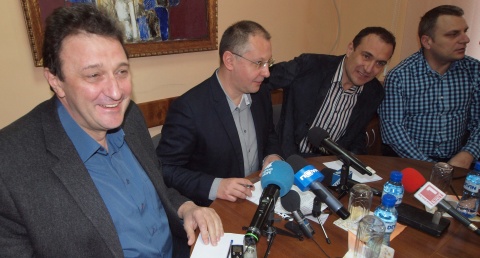 Ex Bulgarian Prime Minister Sergey Stanishev has slammed the center-right Borisov Cabinet for its decision to annual a low-interest loan for the development of Bulgarian Black Sea ports Varna and Burgas.

"Giving up this loan is a treason," declared Stanishev, who is the leader of the opposition Bulgarian Socialist Party (BSP), and whose government made the loan agreements in question with Japan back in 2008.

Speaking at a news conference in the Black Sea city and port of Varna he refuted the arguments of the Borisov government that Bulgaria must give up on the Japanese loans because it had no way of repaying them.

At the end of February 2011, Bulgaria's Cabinet decided to start talks with Japan to annual a low-interest loan previously deemed to be of crucial importance for the development of Bulgarian Black Sea ports Varna and Burgas.

However, the Borisov government decided to go for a termination of the new loan because of the great hardship currently experienced by state company "Port Infrastructure" and Port Burgas Jsc with the repayment of a previous loan that Bulgaria got from Japan for the construction of a bulk cargo terminal.

The brand new terminal at Port Burgas there was constructed with a USD 188 M (BGN 250 M) loan from the Japan Bank for International Cooperation, signed in 1998.

An analysis of the Transport Ministry adopted by the Borisov Cabinet on Wednesday has shown that Port Burgas and the Port Infrastructure company have hardly any way of repaying the already existing loan. Port Burgas has negative financial results, and has borrowed heavily in order to pay its dues to JBIC/JICA, while the Port Infrastructure company is projected to have negative annual balances until 2020 when the first loan will be repaid.

Thus, the Borisov Cabinet assigned the Ministers of Finance, Foreign Affairs, and Transport with the task to handle the talks with the Japanese for the termination of the otherwise favorable second loan.