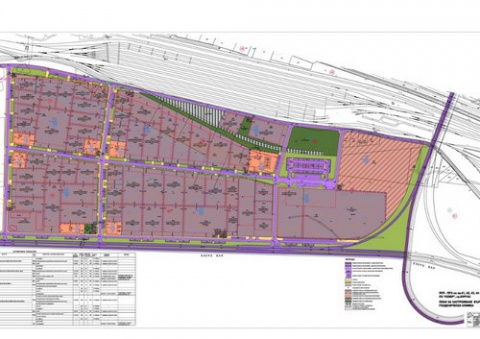 Plan of the future industrial and logistics park in Burgas. Provided by the Burgas Municipality

A new industrial and logistics zone will be set up in Bulgaria's Black Sea city and port of Burgas by the local municipality administration and the state-owned "National Company Industrial Zones."

The new industrial zone will be called "Logistics and Industrial Park – Burgas" EAD, and will be located on the territory of Industrial Zone "Burgas-North".

Burgas Mayor Dimitar Nikolov has already tabled to the city council the proposal for the setting up of the joint venture with the state-owned company in charge of Bulgaria's industrial zones.

"In 2012, the Trakiya Highway (connecting Sofia and the Southern Black Sea coast – editor's note) will be completed and the city of Burgas is becoming an increasingly important center of transport and logistics. We already have inquiries for the new industrial zone but I hope that there will be now an increased interest. We are obliged to provide the investors with good conditions for doing business," Burgas Mayor Nikolov declared.

The Burgas Municipality will participate in the joint venture with the state by providing non-cash assets, most notably the land, while the National Company Industrial Zones is going to provide the funding for the construction of the internal infrastructure of the new industrial and logistics park.

The city council has already expropriated all properties that will be included in the new industrial zone. The municipality has even managed to realize a project funded by the EU with EUR 2.4 M for the construction of a new road to the future industrial zone.

The "Logistics and Industrial Park – Burgas" EAD will be located close to a major railway line and to the Port of Burgas.

The press service of the Burgas Municipality has also announced that the two parties have already drawn statutes for the joint venture.

The joint venture will first be set up as fully owned by the Burgas Municipality, and the National Company Industrial Zones will be invited to join after that.

"The Burgas Municipality extends its hand to all investors developing hi-tech and environment friendly manufacturing, or have projects for investing in logistic parks, electronics, among others," Mayor Nikolov has stated.

Bulgaria's National Company Industrial Zones was established in 2009 to provide for developing industrial zones at several major locations around Bulgaria at the junctions of key transport corridors, close to ports, airports, and industrial and city centers.

Three of those eight zones are considered to be already completed: Free Zone Ruse (37 hectares in area), located at Bulgaria's main Danube port, with French manufacturer Montupet a major investor with a car parts factory. Free Zone Vidin (30.8 ha), located at another Danube Port, and Free Zone Svilengrad (7 ha), close to key crossings on the borders with Turkey and Greece, have also been developed.

The future and "in progress" projects include industrial zones at Burgas (27 ha) and Varna West (109 ha), both at Bulgaria's major Black Sea ports and large cities; and Karlovo (58 ha) and Telish/Pleven West (200 ha), close to major inland industrial centers.

The jewel in Bulgaria's industrial crown, however, is expected to become the future industrial zone in Bozhurishte, right outside of Sofia, with an area of 191.4 ha, which is to be managed jointly with the Chinese Province of Zhejiang, and is to attract major Chinese companies wishing to invest and trade in Europe.

The Bulgarian government and the National Company Industrial Zones have already made economic cooperation agreements with two key Chinese provinces – Zhejiang and Jiangsu.