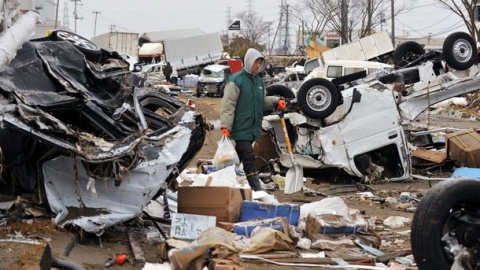 Japan in the aftermath of the devastating March 11 earthquake and tsunami. Photo by EPA/BGNES

The number of casualties from the devastating 9 point magnitude on the Richter scale earthquake and following tsunami that struck Japan on March 11 is still unknown.

According to the Japanese news agency Kyodo, 4 500 have died or are still missing.

2 000 bodies were found on the coast of the Miyagi prefecture. Another 1 000 were discovered on the Oshika peninsula and about the same number in the town of Minamissanriku, according to the Russian Gazetta.ru.

Local administration in Minamissanriku announced earlier that connection with 10 000 or half of the town's population had been lost. Police confirmed 1 597 deaths and 1 481 missing without hope to be found.

In the Iwate prefecture 8 000 are missing, according to the Russian RIA Novosti.

The whereabouts of another 2 500 – tourists who were in the area at the time of the disaster – also remain unknown.

Kyodo informs that the Monday explosion in the Fukushima 1 Nuclear Power Plant, NPP, has injured 11 people, contradicting earlier reports of 3 injured and 7 missing.

Food, water and fuel shortages are reported in northeastern Japan. The Miyagi, Fukushima and Iwate prefectures have been without electric power, mobile phone service and internet since the earthquake.

The situation in Tokyo is returning to normal with stores reopening Monday and public transportation reinstated.