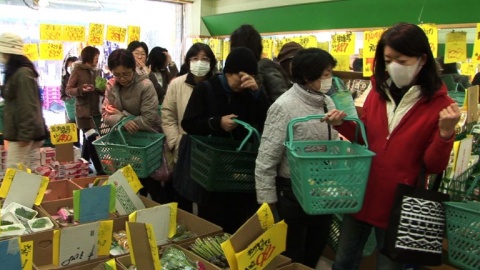 Fearing a shortage of food and worried about the crisis at the Fukushima nuclear facility, people in Tokyo are rushing to supermarkets to stock up on supplies leaving many business running short of essential goods like bread, water, rice. Photo by EPA

Bulgarian Liubomir Topaloff, a journalist and a visiting Assistant Professor at Meiji University in Japan, gives his eyewitness account on Japan's largest earthquake in more than 100 years.*

The most amazing aspect of the earthquake in Japan, for me at least, was the fact that despite its enormous magnitude, I did not see any physical damage of the buildings in the area where I live or the areas that I visited in the aftermath.

When the earthquake struck, the first shock came. I was in my house with a friend of mine and my two little children were sleeping, having an afternoon nap. We are quite acquainted to experiencing small shocks. The first time when I experienced a small shock was about six months ago when we arrived in Japan. It happened in the middle of the night when the bed shook. I was a little bit nervous at the time, but following more and more shocks like this we grew quite used to the situation. Sometimes earthquakes would be felt three, four, even five times a day, but they are not of large magnitude in any case. 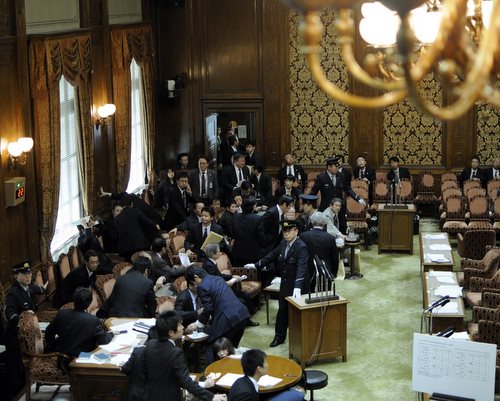 However, we spoke with friends and colleagues and the most consistent advice we received was about some markers. The marker in our case were glasses that we placed on the shelves in the kitchen in such a way that we can see them and also hear them if they fall and break.

When the earthquake started, in the beginning I ignored it just like any other time. But when I saw the glasses banging each other and one of them falling from the shelf, we immediately ran to the kids' bedroom, we grabbed them and ran down the street. The experience was quite surreal because at this point the earthquake was shaking us quite badly and it was scary to see big buildings molding like a Play-Doh in front of our eyes. On the ground the feeling was like standing on a firm wave of the ocean, going up and down, left and right, not knowing which way it will go next. The electricity poles were bending towards us and then away from us just like bushes would wave under the pressure of wind.

Our most immediate concern was about electricity, not about the buildings. After I saw some of the buildings bending like this, but not being destroyed in the matter of seconds, I realized that the buildings are very sturdy and they are not going to fall. However I was afraid of the electric poles and cables that are hanging everywhere. In Tokyo electricity does not go underground, perhaps because of earthquakes. For that reason sometimes the streets look as if they have been covered with a net of cables and other wires. The most immediate concern for me and for our safety was how to stay away from cables that could possibly fall. Thank God, there were no cables falling, but it was amazing to see buildings bending and twisting with amplitude of perhaps twenty degrees, big buildings with glass, going towards each other on both sides of the street. Quite surreal, quite surreal.

It was also quite surprising to see that after such an earthquake the buildings had not suffered visible damage. Even the towels in my bathroom were not cracked, which is strange, because I saw the house twisting left and right. Another amazing thing was the reaction of the Japanese people. I am pretty sure that if the earthquake were to strike anywhere else in the world without exception – be it in the United States, Bulgaria, Western Europe, Africa, and Latin America – we would witness massive panic, even hysteria, in the streets. What we saw here in Japan was quite different. People were acting calmly; they bonded together in small groups and kept reassuring each other. We did not hear any screams, yelling or cursing. People were not visibly stressed out. They were not running hectically up and down looking for shelter. During the earthquake my wife and her friends were in Shinjuku, one of the main business districts in Tokyo, and she told me this story. While they were in a shopping mall, the only people who ran out of the mall in panic were a few foreigners, perhaps Americans, Western Europeans or Australians. They started running without any clear direction up and down the street, looking for shelter. The Japanese people in the mall remained calm and stayed in groups together.

What I witnessed was a well-trained routine on how to react in a disaster. A large portion of the damage and the danger that arises from such disasters is linked to the panic in the normal human reaction. People remained calm even after it became clear there is a pending nuclear disaster coming from Fukushima nuclear power plant. We visited a number of mega-stores and supermarkets and the first thing that was notable was that we could not find anywhere there bottled water. It looks like people bought bottled water in large quantities immediately, as well as dried noodles and canned food. Most of this is a result of a well-trained reaction, people know which products to buy first in case of a disaster and how to prepare themselves. Most of the shelves were literally emptied, there was nothing. People went on a shopping spree for the most essential products – food and liquids.

To recap, apart from the human magnitude of the human suffering and disaster associated particularly with the devastating tsunamis, which hit in the aftermath of the earthquake, I did not see physical damage and destruction caused by the earthquake itself, despite the fact that it has been one of the strongest in the recorded history and certainly the strongest one in Japanese history. Well, let me correct this. I saw one little example of damage – the plant pot of my neighbors fell and broke in the middle of the street. That was the only thing that I noticed in terms of formal destruction. *The account was first published in audio files at MaYoMo (Map Your Moments), a video-centric social news network for user-generated news