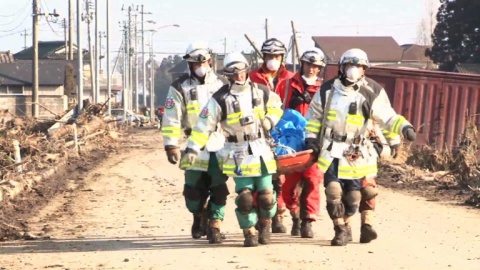 Japan battled a feared meltdown of two reactors at a quake-hit nuclear plant Sunday, as the full horror of the disaster emerged on the ravaged northeast coast. EPA/BGNES

A total of 590 000 Japanese have been evacuated in the wake of the devastating earthquake followed by a tsunami that hit the country on Friday.

Some 380 000 Japanese were evacuated from the areas affected by the tsunami and the earthquake and currently live in 2 050 evacuation camps around the country, the UN Office for the Coordination of Humanitarian Affairs (OCHA) announced.

In its Sunday report on the situation in Japan, OCHA says that the confirmed death toll in Japan has climbed to 1 600 deaths, while almost 1 500 injured, and some 10 000 are declared missing.

In addition, according to the International Atomic Energy Agency, Japan has evacuated 210 000 people living within 20 km of the Fukushima nuclear power plant affected badly by the natural disaster.

The UN has noted the rising concern in Japan and among the international community regarding the situation of the nuclear reactors in the country. Issues have been reported in the plants in Fukushima, Onagawa, and Tokai No. 2.

"Japan is on high nuclear alert and the Government has doubled its emergency response effort as the scale of the emergency becomes clearer. The magnitude of Friday's earthquake which triggered the tsunami that ravaged the northeast coast of Japan has been upgraded to 9.0 by the Japan Meteorological Agency. The Agency says the epicenter of the earthquake, 120 km off the coast was 500km long and 200km wide. But it was the tsunami that caused the most damage. The 10-meter high tidal wave surged a quarter of a mile inland destroying everything in its path and causing fires to break out, many of which are still raging," states Sunday's report by OCHA on the situation in Japan.

"About 380,000 people have been evacuated from the tsunami and earthquake affected areas and are being sheltered in 2,050 evacuation centers. According to the International Atomic Energy Agency (IAEA) authorities have also evacuated another 210,000 people living within a 20 km radius around the Fukushima nuclear power plants. On 13 March there was an explosion at the Nuclear Power Plant no. 1 and authorities are continuing to try to reduce the temperature. There are now fears for a second nuclear reactor which has also lost its emergency cooling system. Both nuclear power plants have been declared as nuclear emergencies. The Government says there is no immediate health risk and is taking a number of precautionary measures to protect its citizens.

"Аs the authorities work to get the earthquake-damaged Fukushima power station under control, a major emergency response operation in the tsunami and earthquake affected areas is underway. The Government has ordered 100,000 defence force troops to assist emergency operations with the aid of 190 planes and 45 boats. The Red Cross has 62 teams also providing assistance and there are 178 Disaster Medical Teams deployed, with another 111 teams on the way.

"However, rescue and relief operations are being hampered by continuous aftershocks, tsunami alerts, and fires. Many areas along the northeast coast remain isolated and unreachable by emergency services. To date, 3000 people have been rescued. The most affected area is a town called Minami-Sanriku-cho in the northern part of Miyagi Prefecture. The entire village has washed away and there are grave concerns for 10,000 residents – half the town's population.

The Government has confirmed that 1,600 people have died, another 1419 people are injured and more than 10,000 people remain missing. The number is likely to be higher once emergency service teams are able to reach all the tsunami affected areas. Around the coastal city of Sendai which has a population of one million, the Government says 2,519 buildings have been completely destroyed, and 11,934 damaged either by earthquakes, tsunami or fires. The areas infrastructure is also destroyed with more than 465 roads, 43 bridges, seven railways and five embankments washed away. The police say 5,000 houses remain underwater in Iwate.

"The main humanitarian needs are food, drinking water, blankets, fuel and medical items which the Government and private sector in Japan are urgently mobilizing and sending to the affected areas. The Government says 2.6 million households are without electricity and nearly 3.2 million people are running out of gas supplies. This is critical as it is winter in Japan and the temperature is dropping to one degree Celsius overnight. 1.4 million people also have no access to water. Hospitals are reportedly coping with the number of patients. 145 of the170 designated emergency response hospitals in Japan are now fully functioning."