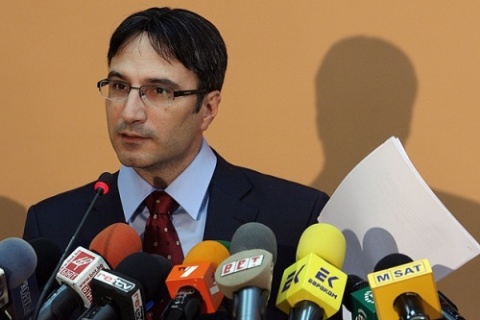 Bulgaria's Economy and Energy Minister, Traicho Traikov, says NPP "Kozloduy" has been planned to sustain earthquakes up to 7 points magnitude on the Richter scale. Photo by BGNES

The events at Japanese Nuclear Power Plants, NPP, are highly unlikely to be repeated at the Bulgarian "Kozloduy" NPP, according to Bulgarian nuclear experts.

The possible meltdown and the explosion at the Japanese Fukushima NPP is not caused by the devastating earthquake that struck Japan Friday, but by the following tsunami, the experts point out.

"Kozloduy" has two nuclear units of the PWR type where the water, which is heated by the reactor, evaporates without contact with the other water which sets the turbo-generator in motion. The NPP has three safety systems with independent electric power supply, with each of them having the capacity to independently cool the reactor.

During the renovations of the two units five years ago a new diesel generating station has been built which can replace either of the other three.

The NPP further has additional pumping aggregates for emergency cooling of the reactor plus it can use fire trucks.

Bulgaria's Economy and Energy Minister, Traicho Traikov, says "Kozloduy" has been planned to sustain earthquakes up to 7 points magnitude on the Richter scale, adding the future "Belene" NPP, if built, will have the same resistance. Even though both are on the Danube River, "Kozloduy" is in a much safer area than "Belene" from seismological viewpoint.

The Minister promises to ask experts, including international ones, for additional analysis of the Bulgarian reactors.