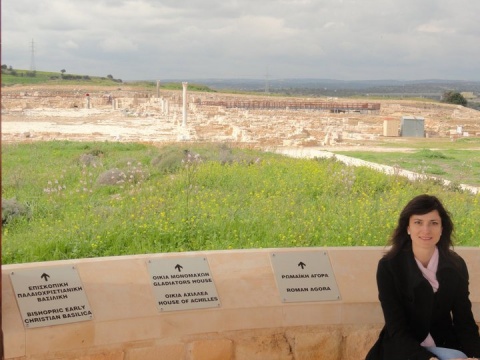 Bulgarian MEP Mariya Nedelcheva (EPP) in Cyprus just a day before she was arrested by Northern Cypriot authorities. Photo from Nedelcheva's Facebook profile.

The authorities in Northern Cyprus have freed the four detained MEPs after a 3-hour-long arrest.

The news was confirmed to BGNES by Bulgarian Mariya Nedelcheva, one of the MEP detainees, Saturday evening.

Joining them were seven more persons, who were also detained. The group was on a mission to check the state of Christian Orthodox churches in the predominantly Turkish-Muslim northern part of the island.

The group was arrested around 5 pm local time upon trying to inspect the first church on their list.

Allegedly one of the group had breached a no-access zone, which provoked the arrest.

According to Nedelcheva, the freeing of the detainees was ensured by the swift and competent actions of the Bulgarian Ministry of Foreign Affairs, the Bulgarian and Polish ambassadors to Cyprus, as well as EU and UN institutions.

The Bulgarian MEP informed that the delegation is already leaving Famagusta for Nicosia.

The particular purpose of the mission was to help Christian churches in Famagusta receive the official protection of the UN.

Nedelcheva said that the buildings are left unused and crumbling, and access to them is severely limited by the Turkish army, which is in direct control of them.