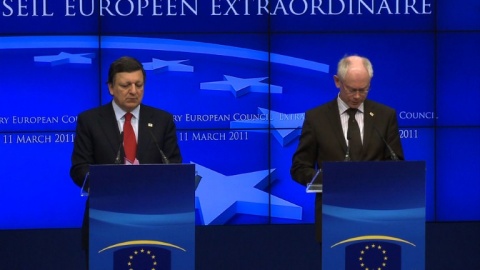 Europe's leaders Friday ramped up pressure on Moamer Kadhafi, agreeing to dialogue with his opponents and protect Libyan civilians "by all necessary means" while stopping short of outright military threat. EPA/BGNES

The European Union has demanded that Libyan dictator Muammar Gaddafi step down from power "without delay", and has recognized the Libyan rebels as a "legitimate" partner.

This has been declared by EU Council President Herman Van Rompuy after the end of the emergency summit of the EU leaders on the conflict in the North African nation.

"The Libyan leadership must give up power without delay. All say it loud and clear", Van Rompuy said of the EU leaders.

EU Council President has also warned that "all necessary options" were being considered to protect Libya's civilian population.

Van Rompuy further said after the end of the EU summit that Libya is on the brink of a civil war.

He underscored that the EU 27 leaders consider the Interim National Council of the Libyan opposition rebels a partner for talks worthy of the trust of the Europeans; e further underscored that EU leaders congratulate and encourage the Council in its struggle against the Gaddafi regime.

The 27 EU member states have published a communique expressing deep concern with the targeting of civilians by the Gaddafi forces including through aerial bombardment and targeted air strikes.

In spite of the insistence on part of the UK and France in favor of some sort of intervention of the EU, no specific steps in that direction have been envisaged, even though the communique itself is seen as a way of opening a door for possible intervention by the EU or the EU-NATO tandem.

However, German Chancellor Angela Merkel has declared that she is deeply skeptical about the possibility of an intervention in Libya saying that international legal base is needed for such a move such as a mandate by the UN Security Council. She said the development of the situation in Libya must be awaited.

French President Nicolas Sarkozy announced that at France's initiative the EU has decided to hold an emergency summit with the Arab League and the African Union to discuss the conflict in Libya.

The EU and NATO have both identified the Arab League as a key diplomatic player in the unfolding crisis. In particular, some member states say that formal Arab League backing would be a vital precursor to any international military action to prevent atrocities in Libya.

"We call for the rapid holding of a summit between the Arab League, the African Union and the EU," the president of the council of EU member states, Herman Van Rompuy, told journalists in Brussels after an emergency summit with EU leaders, as cited by DPA.

EU leaders agreed that the bloc will 'examine all necessary options to protect the civilian population' in Libya, but that 'support from the region' would be a vital prerequisite, he said.

EU foreign policy chief Catherine Ashton is scheduled to meet the secretary general of the Arab League on Monday.