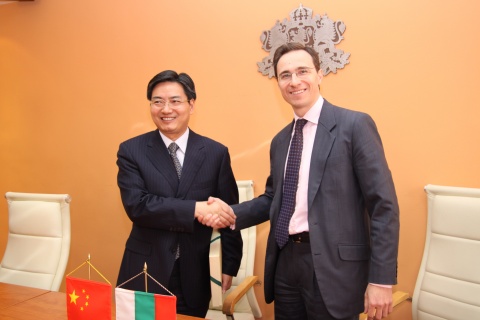 Bulgaria's government has signed an economic cooperation memorandum with a second Chinese provice, Jiangsu, after establishing close ties with Zhejiang in 2010.

The document aimed at boosting the trade and investment ties between Bulgaria and one of China's richest and most developed provinces Jiangsu was signed in Sofia on Thursday between Bulgarian Deputy Economy Minister Evgeni Angelov and the Director General of the Jiangsu Department of Commerce Zhu Min.

On June 15, 2010, Bulgarian Economy Minister Traicho Traikov signed a similar agreement with the Department of Commerce of the Zhejiang province seen as a breakthrough in the economic relations between Bulgaria and China. The governments of Bulgaria and Zhejiang are currently moving ahead with a project for a large-scale joint industrial zone in Bozhurishte near Sofia.

Jiangsu Commerce Department head Zhu Min is quoted as saying that the conditions and incentives offered in the Bulgarian industrial zones are better than in many industrial zones in China, which is set to make Bulgaria's industrial options internationally competitive.

The delegation of China's Jiangsu province is in Bulgaria on three-day visit, and includes both provincial government officials and representatives of Chinese companies working in energy automation, IT, optics, photovoltaics, among others.

In addition to Deputy Economy Minister Angelov, Bulgaria was represented in the talks with the Jiangsu delegation by the two CEOs of "National Company Industrial Zones" Kiril Nikolov and Valeri Andeev, and the head of the InvestBulgaria Agency Borislav Stefanov.

The Bulgarian government has stressed the favorable business climate and investment conditions in the country, and the efforts of the state to make it even more attractive.

The Bulgarian representatives have pointed out that the project for the Bozhurishte Industrial Zone near Sofia is carried out in cooperation with the Zhejiang province but is also opened for other partners. The Bozhurishte project saw a particular boost in September 2010 when Deputy Economy Minister Angelov traveled to China for talks on its specifics.

The Bulgarian government has further told the Jiangsu delegation that it is ready to form a joint venture with the second Chinese province it starts formal ties with for investments in both the Bozhurishte Industrial Zone, and in other projects in major Bulgarian cities, ports, and commercial water routes.

It has pointed out that state subsidies for the transport and logistics sector in the country can help Chinese producers and traders bring their goods to the huge EU and wider European market.

The economic cooperation memorandum between Bulgaria and Jiangsu provides for closer ties between the business sector and governments of both parties, including by providing incentives, carrying out promotional projects, setting up joint ventures in the private and state sector, opening commercial representations, helping the connections between small and medium-sized enterprises.

Jiangsu is China's most densely populated province. In 2009, it was second in terms of its contribution to the Chinese GDP, with a 10.2% share. It features highly developed machine building, electronics, telecommunications, chemical industry, textile, metallurgy. In 2009, Jiangsu companies invested over USD 1 B abroad.

According to preliminary data of the Bulgarian National Bank, China's investments in Bulgaria in 1996-2010 amounted to only EUR 15 M. In 2010, Bulgaria was visited by 6 400 Chinese citizens, while only 441 Bulgarians traveled to China.