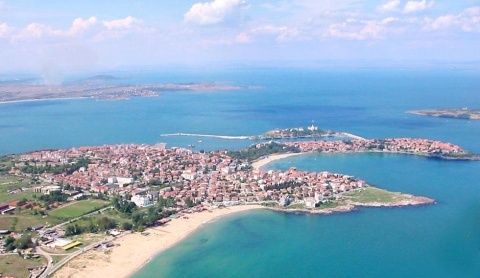 The ancient Black Sea town of Sozopol and the adjacent islands – St. Ivan and St. Kirik have been ranked first among Bulgaria's top 10 "miracles." Photo by sozopol.freebg.eu

The initiative belongs to the Bulgarian daily "Standart." The ceremony was held Wednesday evening at the National History Museum under the patronage of Prime Minister, Boyko Borisov. The guests included politicians, intellectuals and journalists.

Each of the 10 awarded miracles received financing in the amount of BGN 1 M while the cabinet announced its pledge to invest BGN 10 M each year in Bulgaria's cultural heritage.

A number of Bulgarian experts, historians, archeologists, and journalists have also made a commitment to the campaign by becoming members of the Public Council and giving their opinion on the future of the sites.

Number one in the top "10 Miracles of Bulgaria" had been bestowed to the ancient Black Sea town of Sozopol and the adjacent islands – St. Ivan and St. Kirik. The others (from 2 to 10) are: the ancient Thracian sanctuary Perperikon, old town Nessebar, the Thracian sanctuary Tatul, the Belogradchik Rocks and Fortress, the Madara Rider and the Shumen Fortress, the Roman city of Deultum near the town of Debelt, the architectural and cultural medieval sanctuary "Tsarevets" and "Trapezitsa" in the old capital Veliko Tarnovo, and the architectural sanctuary of "Veliki Preslav" (Great Preslav – also an old Bulgarian capital.)

In order to receive the funding, the municipalities on whose territory the miracles are located must present restoration and conservation projects, with a 2011 deadline.

"Standart" have also prepared a video-clip for the top 10 including breathtaking aerial views of the sites filmed from the sky by the Darik radio news chopper. The narrator of the video is popular Bulgarian actor, Hristo Cheshmedzhiev.

The clip, which is the first of this kind, also premiered before the audience gathered for the ceremony at the National History Museum.