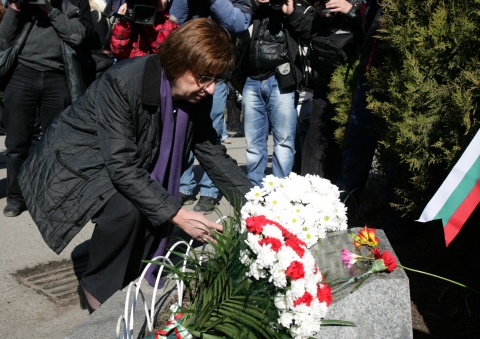 Bulgaria's Parliamentary speaker Tsetska Tsacheva is pictured here as she lays flowers at the memorial by the National Assembly on the Day of Holocaust. Photo by EPA/BGNES

The Members of the Bulgarian Parliament began their Thursday session with a minute of silence in honor of the Day of the Holocaust and the victims of crimes against humanity.

The Speaker, Tsetska Tsacheva, pointed out that for every educated and thinking person, the Holocaust is a memory of pain and a reason to repent.

"I believe that today, we Bulgarian MPs, share values that unite us – democracy, freedom and mainly communication. This makes us dignified heirs of our predecessors, of the Bulgarian people, who in the dark years of the Second World War, refused to obey Nazi orders for the extermination of Bulgarian Jews. So, let's have a minute of silence to honor the memory of the victims of the Holocaust and the 11 343 innocent men, women and children in Macedonia and Aegean Thrace, who perished in dead camps," Tsacheva said.

11 343 Jews were handed over to Nazi Germany from regions in what are now Macedonia, northern Greece and eastern Serbia, but were occupied and managed by Bulgaria during World War II.

Even though Bulgaria was an ally of Nazi Germany in World War II, 50 000 Bulgarian Jews were not deported to the Nazi death camps in 1943 thanks to mass civil protests, active stance by 43 Bulgarian MPs, and Tsar Boris III's resistance to Hitler's demands for deportation.

March 10 was declared a Day of the Holocaust and the Victims of Crimes against Humanity by a decision of the Bulgarian Council of Ministers, dated February 13, 2003.

Society » Be a reporter: Write and send your article
Tags: Day of the Holocaust and the Victims of Crimes against Humanity, minute of silence, Jews, Shalom, Holocausr, Tsetska Tsacheva, MPs
Advertisement
Advertisement
Expats.bg All Are Welcome! Join Now!
Related Articles:
More from Society