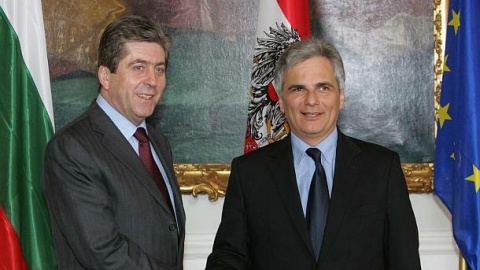 The projects focus on the building of gas storage facilities and increase of energy effectiveness.

Upon conclusion of the talks, Parvanov, who is on an official visit to Austria Tuesday, told reporters that renewable energy sources is one of the sectors the two countries will for sure collaborate.

"Bulgaria has declared its ambitions, its European commitments, but still lacks the capacity of making these commitments a reality. So, we agreed on future research of all options for partnership. Austria is building a gas storage facility and two years ago we had an energy crisis precisely because we did not have enough natural gas stored – this is definitely an area of future collaboration," the President is quoted saying..

The two officials have further discussed investments in science and innovations, coordination of the fiscal and economic policies of the EU, the Danube strategy, and Bulgaria's Schengen zone entry.

Parvanov assured Faymann Bulgaria will fulfill all technical requirements for Schengen in the next 10 days, pointing out it would be unfair to use other criteria for assessments such as the Cooperation and Verification Mechanism.

The Mechanism was set after Bulgaria's  EU accession on 1 January 2007 over weaknesses remaining in the areas of judicial reform, the fight against corruption and organized crime to assist Bulgaria to remedy these shortcomings but also to regularly verify progress against six benchmarks set for this purpose.

The President explained Bulgaria counts that its Schengen membership would materialize during the Hungarian Presidency of the EU.