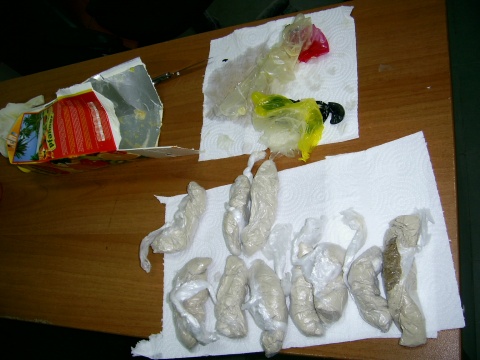 Heroin packed in condoms on the bottom of a juice cartoon was found by Bulgarian customs officers. Photo by Customs Agency

Bulgarian customs officers have captured an unorthodox heroin shipment – the drugs were hidden in condoms and a cartoon of juice.

A total of 380 grams of heroin were found on the Kalotina crossing on the Bulgarian-Serbian border in the baggage of a 20-year-old Bulgarian traveling by bus from Sofia to the Czech Republic.

The customs officers inspected a suspiciously heavy cartoon of juice that the young man had with him in a bag with food products. When they poured out the juice they found that the cartoon was filled with heroin packed inside condoms.

The Customs Agency press service says the "ingenious" condom-protected heroin was captured after earlier the officers at Kalotina detained an illegal shipment of ancient coins.