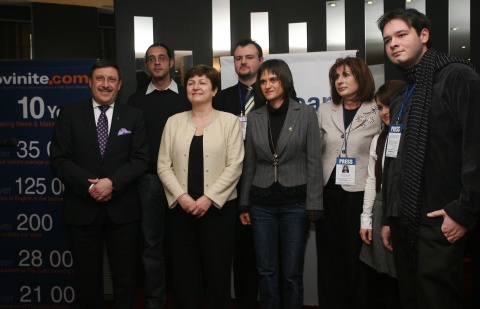 Dozens of representatives of the diplomatic corps in Sofia, the Bulgarian government, the business, sector, and the media joined the Publishers and Editorial Board of Novinite.com (Sofia News Agency) at the glamorous birthday party Monday afternoon in the Radisson Blu Hotel in the Bulgarian capital.

"Upon arriving, Her Excellency, the Ambassador of Norway to Bulgaria, Tove Skarstein, asked me if I was organizing this event. I am glad to say that I have been organizing it for ten years now. I would like to thank all of our and all of our readers from around the world for being with us," the founder and publisher of Novinite.com (Sofia News Agency) Maxim Behar told the guests at the birthday event.

Behar reminded that the first article ever published by Novinite.com (Sofia News Agency) written by him personally was "Radisson SAS Opens In Sofia" (Sunday, March 11, 2001), which is why the holding of the birthday event at the Radisson had a symbolic meaning.

"There are approximately 5 260 000 minutes in one decade. In this past decade we have been with you every single one of these minutes. We remain committed more than ever to serving you, our readers," Ivan Dikov, Editor-in-Chief of Novinite.com (Sofia News Agency) said.

At the 10th birthday party of Novinite.com (Sofia News Agency), the Publishers and Editorial Staff awarded Kristalina Georgieva, EU Commissioner for humanitarian aid, for having been elected "Bulgaria's Personality in the News 2010" by YOU, our readers from all around the world!

In the voting in December and January Georgieva grabbed the first place in the annual poll of Novinite.com (Sofia News Agency) by a narrow margin, with the star striker of Manchester United Dimitar Berbatov remaining a very close second.

"I would like to thank explicitly Novinite.com for their outstanding coverage of both Bulgarian and European topics! When I was working in Washington, DC, and now when I am working in Brussels I send very often articles of Novinite.com to my colleagues and associates," EU Commissioner Georgieva said upon receiving her award as "Bulgaria's Personality in the News 2010."

Novinite.com (Sofia News Agency) traditionally polls its readers from around the world at the end of each year to give them the chance to determine the most important personalities of the year. In 2009, the readers of Novinite.com placed first UNESCO's Bulgarian Director-General Irina Bokova, followed by Prime Minister Boyko Borisov and Bulgaria's former EU Commissioner Meglena Kuneva.

Novinite.com's online daily newspaper, The Sofia Morning News (called Bulgarian Breaking News at the time), was launched on June 1, 2001. Its subscription figures - and that of The Sofia Weekly - each near 30 000.

The Team of Novinite.com (Sofia News Agency) would like to thank all of you, our readers from around the world, who have taken eager interest in our work, and have supported us throughout the past 10 years! We remain committed to serving you more than ever before!