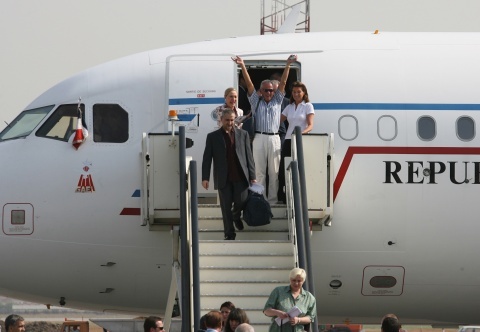 Tripoli protested against the pardoning of the Bulgarian medics, claiming it breaches the prisoner transfer agreement signed in 1984, based on which the medics were repatriated. Photo by Sofia Photo Agency

A Libyan official, who bought infected blood at a low price and pocketed the balance, is behind the HIV outbreak in Benghazi, according to fresh diplomatic cables, revealed by WikiLeaks.

"The whole story is just one corruption case," reads a cable from the US Embassy in Madrid to the State Department, issued at the beginning of 2007. It cites information received by Spanish diplomat Carlos Fernandez-Arias, who worked at that time at the Spanish Foreign Embassy and was in charge of Northern Africa.

The revelation comes just days after Libya's former Justice Minister, who recently joined the anti-Gaddafi forces in the country, stated that not the Bulgarian medics, but the regime of leader Muammar Gaddafi was responsible for infecting more than 400 children with HIV.

Mustafa Abudel-Jalil made the statement late Wednesday for Al Jazeera, saying the trial involving Bulgarian medics was just one of several serious crimes committed by Gaddafi's regime against his own people.

Eleven years after their arrest and the horrors of Libya's jails, the six Bulgarian medics, who were sentenced to death in the Jamahiriya, have been morally vindicated, but they say the much-awaited moral victory over the mercurial, merciless and manipulating tyrant is not that good bit of news. After having spent years on end in an African prison, much of it on a death row, they say the absolving just came a bit too late.

The travesty trial of the Bulgarian medics in Libya was a clear act of blackmail from the very beginning. In 2007, Bulgaria completely wrote off Libya's debt to facilitate negotiations and obtain the release from jail of the six Bulgarian medics.

The involvement of the Sarkozy couple in the final stages of the talks and the suspicious deal the French President struck with Gaddafi secured their transfer and subsequent pardoning in Sofia.

Tripoli protested against the pardoning of the Bulgarian medics, claiming it breaches the prisoner transfer agreement signed in 1984, based on which the medics were repatriated.