Novinite.com to Award EU Commissioner Georgieva at Its 10th Birthday 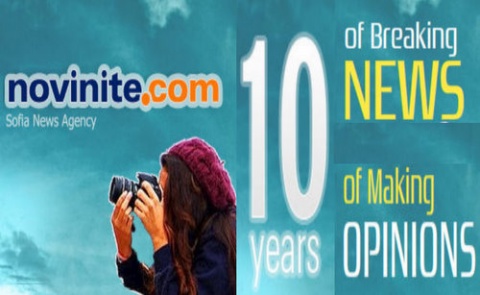 Bulgaria's largest English-language media Novinite.com (Sofia News Agency) is celebrating its 10th birthday at a special event in Sofia on Monday with EU Commissioner Kristalina Georgieva being an honorary guest.

Novinite.com's online daily newspaper, The Sofia Morning News (called Bulgarian Breaking News at the time), was launched on June 1, 2001. Its subscription figures - and that of The Sofia Weekly - each near 30 000.

At the 10th birthday party of Novinite.com (Sofia News Agency), the Publishers and Editorial Staff will award Kristalina Georgieva, EU Commissioner for humanitarian aid, for having been voted "Bulgaria's Personality in the News 2010" by YOU, our readers from all around the world!

The much anticipated event is taking place at 2:30 pm on Monday, March 7, at the Radisson Blu hotel in downtown Sofia, and will combine the celebration of the 10th birthday of Novinite.com (Sofia News Agency) with an award ceremony for Georgieva voted by our readers to be the most deserving Bulgarian "Personality in the News" in 2010.

Georgieva's the first place in the annual poll of the largest Bulgarian English-language media Novinite.com (Sofia News Agency) appears to be a recognition of her successful first year as the EU Commissioner for International Cooperation, Humanitarian Aid and Crisis Response as she has spearheaded EU's relief efforts around the globe and institutional arrangements for greater intra-EU cohesion with respect to her portfolio.

Georgieva grabbed the first place in the annual poll of Novinite.com (Sofia News Agency) by a narrow margin, with the star striker of Manchester United Dimitar Berbatov remaining a very close second.

Interestingly, the readers of Novinite.com (Sofia News Agency) from around the world placed third in the annual poll for "Personality in the News" 2010 the Bulgarian Roma expelled from France over the summer and fall of the last year, apparently in recognition of the importance of the so called "Roma Issue" for Europe. Bulgarian Finance Minister Simeon Djankov has been ranked fourth, followed by US Ambassador to Bulgaria James Warlick.

Novinite.com (Sofia News Agency) traditionally polls its readers from around the world at the end of each year to give them the chance to determine the most important personalities of the year. In 2009, the readers of Novinite.com placed first UNESCO's Bulgarian Director-General Irina Bokova, followed by Prime Minister Boyko Borisov and Bulgaria's former EU Commissioner Meglena Kuneva.

The Team of Novinite.com (Sofia News Agency) would like to thank all of you, our readers from around the world, who have taken eager interest in our work, and have supported us throughout the past 10 years! We remain committed to serving you more than ever before!