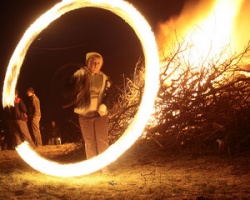 Bulgarians celebrated on Sunday Sirni Zagovezni, a popular Orthodox Christian holiday. As a part of its celebration big ritual fires are lit. Photo by BGNES

Bulgarians observe Sunday a self-styled traditional 'Forgiveness Day' on which everyone asks everyone to forgive his or her misdeeds over the passed year.

The rite is centered in families and communities, in which people ask their elders, including parents and superiors to absolve whatever they have done wrong, even if they do not know it or did not intend it.

The holiday is observed on a Sunday, exactly seven weeks before Easter, and is also called Sirni Zagovezni. That name refers to the fact that one is allowed to eat milk products, the day being located within the Easter Fast. Sirni Zagovezni is also considered a preparation for the Great Lent.

In some parts of the country the forgiveness day is also associated with the manifestly pagan kukeri dance, in which men dressed like demons try to chase evil spirits away.