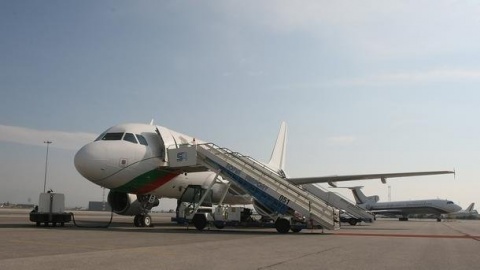 A plane of the Bulgarian flag carrier "Bulgaria Air" is on standby, ready to depart on a humanitarian mission to Libya, the Foreign Ministry announces Saturday in a press release.

The information confirms statements of Prime Minister, Boyko Borisov, made a day earlier during his official visit to Spain.

The plane will transport refugees from Libya to Egypt. It will execute between 3 and 6 two-way flights.

According to assessments of the European Commission, a huge humanitarian crisis is looming in the region with 100 000 people currently attempting to leave tumultuous Libya and reach their native countries. The largest group includes 15 000 Egyptian citizens.

In addition, the government's Airbus 319 with 140 seats is expected to transport about 400 Egyptians from Tunisia to Cairo.

"The Middle East is too close to us and Bulgaria and the EU cannot afford to allow a large-scale humanitarian crisis there, more so because the political crisis in Libya is far from being over. There are tens of thousands of Egyptians still stranded in Libya. Bulgaria has reached an agreement with Tunisia and Egypt to assist these people," Foreign Affairs Minister, Nikolay Mladenov, is quoted saying.