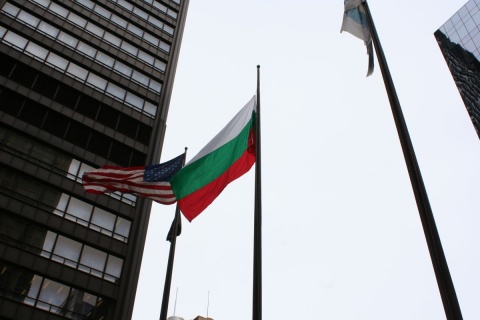 The Bulgarian national flag floats along the US one in downtown Chicago in commemoration of Bulgaria’s National Holiday. Photo by Eurochicago.com

The Bulgarian national flag has been once again hoisted in downtown Chicago to mark Bulgaria's National Holiday, March 3.

The official ceremony commemorating the 133rd anniversary of Bulgaria's liberation from Ottoman rule began with the performance of the national anthem and the lifting of the flag along with the American and Chicago flags at the city's "Daley Plaza," Eurochicago.com, the Chicago-based largest web portal in Bulgarian in the US reports.

The tradition dates from 1960, when a group of Bulgarians met with the then Mayor of Chicago, Richard G. Daley, Sr., father of the current mayor, asking him to declare March 3 the Bulgarian Day in Chicago. Moved by the patriotism and the story of the expats, the Mayor fulfilled the request. The celebrations were reinstated in 2006 by his son, Richard M. Daley Jr., with the day listed in the city's official calendar as a sign of respect for the Bulgarian diaspora in Chicago.

The 2011 celebrations, organized by the Bulgarian Consulate and the Bulgarian-American Center for Cultural Heritage, continued at the City Hall building where the Consul General of Bulgaria, Valentin Donchev, greeted the guests, thanking Mayor Daley for making the dignified celebration possible for the fifth year in a row.

The ceremony was accompanied by the traditional Bulgarian folk dance "horo," performed by the group under the same name ("Horo"), and the children group "Hortse," at the Bulgarian "John Atanassov" school.

All guests were given the traditional Bulgarian martenitsa - the symbol of spring and well-being.

The President of www.Eurochicago.com, Petranka Stamatova, announced the winner of the 2010 Bulgarian Event in the US while those receiving the Lenovo laptop award were determined by a drawing.

The eight grade graduates from the "John Atanassov" school collected 27% of the vote and became the winners of the contest for attending the school from grade one to grade eight – the only such achievement of Bulgarian students outside the country. Their graduation ceremony on May 24, 2010, the Day of Slavic Script and Culture, was attended by John Atanassov Jr.

The other events among the top 10 are (in order of their ranking): increase in the number of Bulgarian schools in the US to reach 20; the March 3rd celebrations in Chicago; Antony sings with Bocelli; the US tour of popular Bulgarian late night show host Slavi Trifonov and his "Ku Ku" band; the Bulgarian-American Association festivals in Chicago; the May 24 Gala concert performed by the Lincolnwood Chamber Orchestra with Maestro Philip Simmons as conductor, Bulgarian piano prodigy, Victoria Vassilenko, and the "Horo" dance troupe among others; the Nina Dobrev Teen Awards; the Auto Show of Alexander Aleksiev, the only Bulgarian automobile designer with its own spot in an American car show;  the "Beyond Borders" exhibit if 20 Bulgarian painters living in the US and Canada.

Society » Be a reporter: Write and send your article
Tags: March 3, Bulgarian Diaspora in Chicago, Daley, EuroChicago.com, 2010 Bulgarian Event in the US, Chicago
Advertisement
Advertisement
Expats.bg All Are Welcome! Join Now!
Related Articles:
More from Society