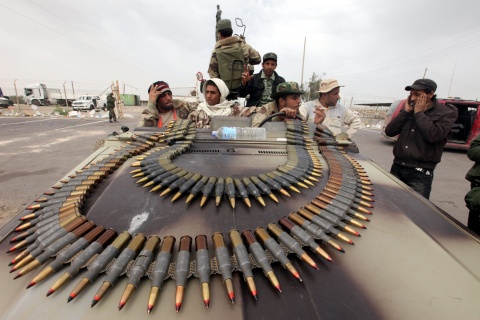 Force's loyal to Libyan dictator Muammar Gaddafi have recaptured the city of Zawiyah near Tripoli from the hands of the anti-regime rebels.

"The people of Zawiyah and the heads of the popular committees have made Zawiyah safe from the armed terrorist forces," reported Channel One of Libyan state TV.

Libyan Channel Two said government forces were in control of most of the middle-class dormitory town just 60 kilometres (40 miles) west of Tripoli, and tanks, troop carriers and rocket-launchers had been seized from the rebels.

According to Al Jazeera, at least 50 men have been killed and 300 wounded in the war between the Gaddafi military and the pro-democracy rebels.

The rebels have tried to keep control of Zawiyah because of its strategic location near the capital Tripoli.

Earlier on Friday, the rebels called for foreign air cover as Gaddafi's air force has been attacking them in the last few days.