Reminiscence from Days of Liberation* 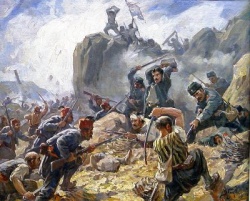 The battle for the Shipka passage in August 1877 reproduced by artist Dimitar Gyudzhenov. Photo by President.bg

The national liberation movement of Bulgaria reached its peak in the April uprising of 1876. It had a worldwide response. World public opinion raised its voice in defense of the Bulgarian people. British, American, Italian, French, German and Russian journalists and consuls made known to their governments and their peoples the truth about these monstrous crimes. Prominent statesmen, political and public figures, intellectuals and scholars to whom the Bulgarians would always be indebted, joined in a campaign for the Bulgarians' right to lead free life.

Some of the names that stand out among the champions of the Bulgarian people's cause are those of William Gladstone - leader of the Liberal party of Britain, Charles Darwin, Oscar Wilde, Victor Hugo and Giuseppe Garibaldi. The first Chancellor of the German Reich, Bismarck made a speech in the Reictistag to the effect that the abominable bloodshed in Bulgaria had rendered Turkey no longer eligible to a place in the community of the European states.

Appalled and indignant as it could be, the European public opinion also urged their respective governments to undertake decisive actions against this barbaric smash of the uprising.

The suppression of the April uprising was the immediate reason underlying a large-scale international concern that culminated in the Russian-Turkish War of 1877-78.

In the summer, autumn and winter of 1876 the Russian government went out of its way to settle the Bulgarian question in a peaceful way. It made attempts to smooth its contradictions with the other European powers. The so-called Tsarigrad conference (the south Slavonic name for Constantinople), which took place in December 1876, was the culmination of their diplomatic effort with Russia, Britain, France, Austria-Hungary, Germany and Italy all partaking.

The joint reform-prescribing plan to which Turkey committed itself in advance, made provision for the autonomy of all Bulgarian-inhabited lands in Macedonia, Moesia, Thrace and Dobrudja. These lands were part of the two Bulgarian states with their respective capital cities of Turnovo and Sofia. The territories of these two states extended as far as the ethnic boundaries of the Bulgarian people and, despite their artificial division, they were adequate to the Bulgarians' needs and aspirations. Turkey, however, rejected that plan on the very day of its signing.

This last-ditch prestige-harming flop made even the Turkey-supporting West European states withdraw their customary back-up and agree to a military settlement of the Bulgarian question.

After preliminary talks with the European Great Powers on the possible outcome of hostilities, Russia declared war on Turkey on 12 April 1877. As early as that day, a military campaign was launched along the Russo-Turkish Caucasian border. On the Balkans the Russian army had to overcome the Danube - a major water barrier, before coming anywhere near the Turkish troops. The Russians crossed the Danube in June 1877.

The Bulgarian people met the news of the Russo-Turkish war with great enthusiasm and it too, rose against its centuries long oppressor. A Bulgarian military detachment called 'Bulgarian volunteers', consisting of 12 battalions 12 500-strong, joined the Russian army. Hundreds of concomitant guerrilla detachments having from several dozens to several hundreds of soldiers were organized, too.

Thousands of other Bulgarians directly joined the Russian army to help as reconnaissance officers, engineers of fortification facilities, medical orderlies, suppliers of fodder and food, etc.

About the middle of July, the Russian leading detachment with Bulgarian volunteer forces included in it, reached as far as Stara Zagora that was almost half-way through to Constantinople. The troops meant to protect the western flank of the Russian army in Bulgaria suffered a defeat in two assaults against the strategic fortress of Pleven, located only sixty kilometers away from the Danube.

The crippled Russian army at this site was not even able to keep off the besieged Turkish army. At that time the Turkish military forces, concentrated on the eastern flanks of the corridor occupied by the Russians, also grew unimpeded. Soon their number was three times as large as the Russian troops withholding them. Turkish crack regiments four times as big as the Russian advance detachment were coming on from its opposite direction.

Having no alternative but to sucumb to the superior force, the Russians and the Bulgarians withdrew to position along the Balkan Mountain ridge in the region of the Shipka pass.

As fate has strangely willed it, the liberation of Bulgaria was entirely dependent upon the efficiency of the several thousand Bulgarian volunteers in keeping their positions on Shipka in those summer days. For, due to its misjudging the direction of the Turkish main effort, the command of the forces on Shipka had to send Russian operational reserve contingents to help in the defence of Hainboaz, another throat in the mountain. The Bulgarian volunteer detachment and only one Russian regiment remained on Shipka.

During the hot days of August 1877 epic battles took place on that mountain peak at the geographical intersection point of the Bulgarian lands. There the Bulgarians proved that they thoroughly deserved their freedom. When the arms and ammunitions finished, the volunteers resorted to blank weapons to repulse the attacks. In fierce man-to-man fighting they showered boulders and other mass of rock, even their dead comrades' bodies.

Pertinacious and murderous was the Bulgarians' effort that crushed the Turkish army and caused it to lose nearly half of its strength. The Bulgarian volunteers withstood their positions and thus, coped with a situation that spelled more and even greater danger.

A quick change of scene and reversal of the war occurred after the arrival of fresh Russian reinforcements. They took Pleven and, at the end of 1877, crossed the Balkan Mountains in a wide-ranging counter-offensive. Following victorious battles at Sofia, Plovdiv and Sheinovo, the Ottoman military machinery was shattered, dilapidated and ruined.

A preliminary peace treaty was signed in the small town of San Stefano near Constantinople on 3 March 1878. It made provision for an autonomous Bulgarian state extending to almost all Bulgarian lands in the geographical areas of Macedonia, Thrace and Moesia.

The terms of the San Stefano peace treaty included the restoration of Bulgaria's state independence and the Bulgarians' reunification within the boundaries of one state.

*An extract from the book "Bulgaria Illustrated History"