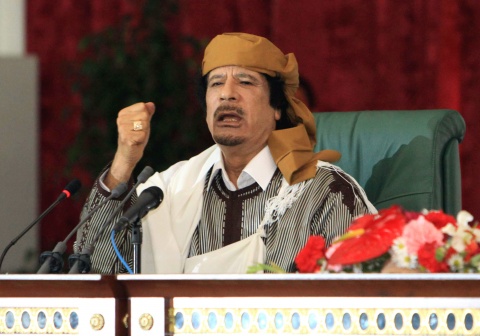 Libyan leader Muammar Gaddafi gestures during his speech on the occasion of the 34th anniversary of establishing the General People's Committee (GPCO) in Tripoli, Libya, 02 March. Gaddafi will be the second dictator after his Sudanese colleague to be inve

ICC prosecutor Luis Moreno-Ocampo announced Wednesday, as cited by the UN news center, that a preliminary examination of available information shows that an investigation is warranted after the Security Council last week asked him to look into the violent repression of protesters in Libya.

UN data indicates at least 1 000 people have been killed in the clashes between Gaddafi loaylists and pro-democracy rebels.

ICC prosecutor Moreno-Ocampo will present an overview of the alleged crimes committed in Libya since 15 February and information on the entities and persons who could be prosecuted at a news conference in The Hague on Thursday.

After his investigation he will present his case to ICC judges who will then decide whether or not to issue arrest warrants based on the evidence. Only one sitting head of state has so far been indicted by the ICC and slapped with an arrest warrant – Sudanese President Omar al-Bashir, who was charged in March 2008 with war crimes and crimes against humanity in the strife-torn Darfur region.

The Gaddafi case is the second time ever the UN Security Council has asked the ICC prosecutor to start an investigation since the ICC was started in 2002.

The ICC motion comes after on Tuesday the General Assembly yesterday suspended Libya from the UN Human Rights Council for "gross and systematic" human rights violations because of the violent repression.

Meanwhile, UN agencies on the ground are gearing up to provide humanitarian aid for the more than 150,000 people who have already fled to neighbouring Tunisia and Egypt and the many more who remain within Libya, with the World Food Programme (WFP) launching USD 38.7 M emergency operation to provide food aid to 2.7 million people in the three countries.