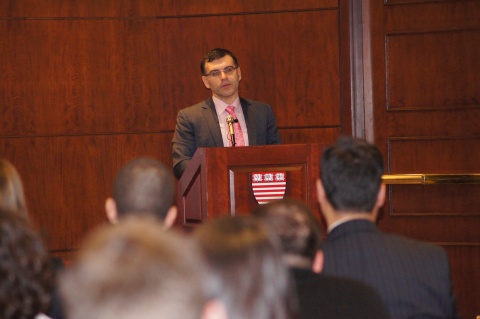 Strict rules ensuring financial stability do not limit politicians but discipline them, Bulgaria's Deputy Prime Minister and Finance Minister, Simeon Djankov, said during his public lecture at Harvard University in the US.

Djankov stressed the need of principles for fiscal discipline, backed by the law during his lecture at the Harvard Kennedy School of Government, as cited by the press service of the Bulgarian Finance Ministry.

The Bulgarian Finance Minister has used the opportunity to present at Harvard his initiative for a "Financial Stability Pact", a set of proposed amendments to the Bulgarian Constitution designed to guarantee strict conservative fiscal policies.

At the time the European Union launched a debate on the necessity of stricter common European rules, the Bulgarian cabinet offered the idea for a Financial Stability Pact, Djankov pointed out, presenting before the audience the three measures included in the project for the introduction of a mechanism to change direct taxation through a qualified parliamentary majority.

The measures termed "Financial Stability Pact" were first announced by Djankov on February 8 at a lecture at the New Bulgarian University in Sofia following the US tradition in which crucial policy speeches are delivered at academic institutions.

The three main pillars of Djankov's Financial Stability Pact to be solidified via Constitutional amendments are introducing a limit to allowed budget deficit, restricting the ability of the state to redistribute public funds as a percentage of the GDP, and introducing a qualified majority vote of two-thirds of the votes in Parliament to change Bulgaria's direct taxes.

Djankov believes that the Financial Stability Pact and the so called "fiscal board" that it stipulates will help Bulgaria to join the euro zone in the medium run while he himself does not plan to be pressing for accession to the euro zone waiting room, ERM II, for the time being.

Djankov, a former senior World Bank economist, is a globally renowned economic scientist. His lecture at Harvard on fiscal discipline appears to be important in light of his hopes to "export" the Financial Stability Pact idea to other EU countries once the measures are adopted and proved to be feasible in Bulgaria.

Bulgarian Finance Ministry's team already began consultations with all parliamentary represented political formations, including the opposition, even though it is still unclear if his motion will get the needed 180 votes out of a total of 240 MPs to amend the Constitution.

The last three governments were able to establish a continuity in the country's fiscal policy – the effort to maintain low taxes, low State debt and low deficit, which secured the relatively easy way of dealing with the crisis, according to Djankov.

The Minister further explained that due to historical reasons, Bulgaria had a disadvantageous starting position at the time of its EU accession and the main task of the cabinet now is to achieve average European living standards.

The good macro-economic indicators would lead to a speedy recovery if future governments continue to lead a disciplined fiscal policy. At first glance, the idea for fiscal rules being included in the Constitution could seem radical, but Bulgaria needs courageous and successful solutions, and when the issue of economic security is on the table, politicians must overcome their traditional differences, Djankov pointed out before the Harvard audience.

"Bulgaria is coming out of the crisis stable with a good regional position and a bright future," the Minister concluded.