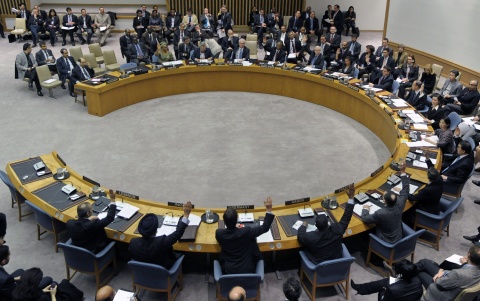 The UN Security Council voted unanimously Saturday night to impose sanctions on Libya's Muammar Gaddafi regime over excessive use of force in dealing with the civil rebellion.

The UN General Assembly has voted unanimously to to suspend Libya from the Geneva-based UN Human Rights Council.

The resolution - passed by consensus by the UN 192-membership - accuses Libya of committing gross and systematic violations of human rights.

The UN Secretary General Ban Ki-moon said: "These UN actions send a strong and important message - a message of great consequence within the region and beyond - that there is no impunity, that those who commit crimes against humanity will be punished, that fundamental principles of justice and accountability shall prevail."

The US ambassador to the UN, Susan Rice, pointed out: "People who turn their guns on their own people have no place on the Human Rights Council."

The UN Security Council voted unanimously Saturday night to impose sanctions on Libya's Muammar Gaddafi regime over excessive use of force in dealing with the civil rebellion.

The Council decided on arms embargo, asset freeze and referring Gaddafi to the International Criminal Court for alleged crimes against humanity.

The United Nations Refugee Agency (UNHCR) has warned that the situation at the Libya-Tunisia border is reaching a "crisis point" on Tuesday because of the high number of people escaping Libya.

According to the UN, about 70-75 000 people escaped the violence in Libya since the protests against leader Muammar Gaddafi began February 20.

BBC reports, however, a resolution imposing a no-fly zone over Libya, a move the UK in particular has been investigating, is not going to be reached in the near future.

US Defense Secretary Robert Gates warns that any military action over Libya, such as setting up a no-fly zone, must be carefully considered because of the potential consequences.

"We also have to think about, frankly, the use of the US military in another country in the Middle East. So I think we're sensitive about all of these things, but we will provide the President with a full range of options," Gates said, referring to the long US-led war in Iraq.

UK Foreign Secretary William Hague points out the action could still be taken as "there have been occasions in the past when such a no-fly zone has had clear, legal, international justification even without a Security Council, but French Foreign Minister Alain Juppe says there would be no no-fly zone without a UN resolution and Russia has described a no-fly zone as "superfluous".

Protesters fear the Libyan air force could launch attacks to try to oust them from the towns they have won.