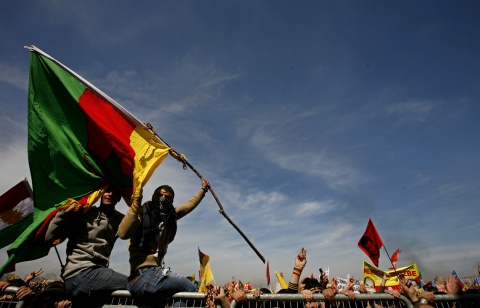 PKK (Kurdish Workers Party) has announced it is ending the cease-fire in Turkey and would start defending itself more actively. Photo by EPA/BGNES

The Kurdish separatist organization, Kurdistan Workers' Party (PKK), which has been at war with Turkey since 1980s, has announced it is ending the unilateral cease-fire.

The party's statement was published Monday on the Turkish news agency Firat, believed to be its mouthpiece, the Wall Street Journal reported.

The statement said that the PKK would keep the cease-fire, which began in August, until June, which is also the month of the general elections in Turkey.

The spokesman of the Turkish PM Recep Tayyip Erdogan said the government had not formulated a response to the statement yet.

"The real problem is the approach of the ruling AK Party's government to this problem, which is tactical and has not abandoned a mindset of denial and annihilation, and policies of aggression," the PKK said, adding that the government's policy is "assimilating the Kurdish people within the Turkish nation and never recognizing its existence, identity and freedom".

The PKK has been fighting Turkey's military since 1984 in a bid to form an ethnic homeland in southeastern Turkey. This was has claimed the lives of about 30-40 000 people. Most of the casualties have been ethnic Kurds, which are about 20% of the 73-million population. However, the group has also carried out attacks on civilians in the past.

The Kurdistan Workers' Party is listed as a terrorist organization in Turkey, the United States, and the European Union.

The PKK declared a period of non-action in August and then extended it until the elections, set fro June 12, to give the Turkish ruling AK Party space to address Kurdish grievances.

Ahmet Deniz, a member of the PKK leadership in northern Iraq, said that the trial of 152 Kurdish activists and politicians ahead of the elections showed the government was not sincere about ending the conflict.

In 2009, Erdogan launched a Kurdish "opening", which aimed to broaden the cultural rights for the largest minority in Turkey, in an attempt to end the fight with the PKK, but the efforts have failed.