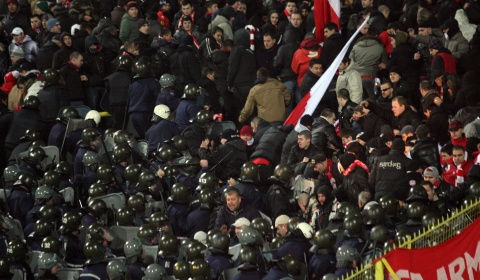 Over one thousand police in full gear stormed sector "G" of the "Gerena" stadium (home of the "Levski" team) and pushed the CSKA fans out to prevent violence during Bulgaria's eternal derby between the two teams. Photo by BGNES

Three public transportation buses and two trolleys have been seriously damaged with broken seats and doors and holes punched in the ceilings.

A store window has been broken on the "Madrid" boulevard in downtown Sofia.

Police had to undertake extreme measures during half-time and removed by force the CSKA fans. Over one thousand police in full gear stormed sector "G" of the "Gerena" stadium (home of the "Levski" team) and pushed the CSKA fans out.

23 people have been arrested. Three police officers have been seriously injured, one of them is listed at the emergency "Pirogov" hospital, the Director of the Sofia Directorate of the Interior Ministry, Valeri Yordanov, informs.

The Head of the Directorate's Department for the Fight against Football Hooliganism, Anton Zlatanov, told the private TV channel bTV, there were way more policemen injured during the clashes, adding details and precise numbers are still examined and video cameras have taped the perpetrators.

A football fan, 25, is also listed in "Pirogov" with head and face injuries.

CSKA owner, Dimitar Borisov, says police acted accordingly and fans have not been subject to police violence, but pointed out those who had purchased tickets and have been peaceful should had been left to watch the game until the end.