Best-selling Bulgarian-American Author Zachary Karabashliev: I Am Not in the Business of Telling Truths - You Always Have Politicians to Do It 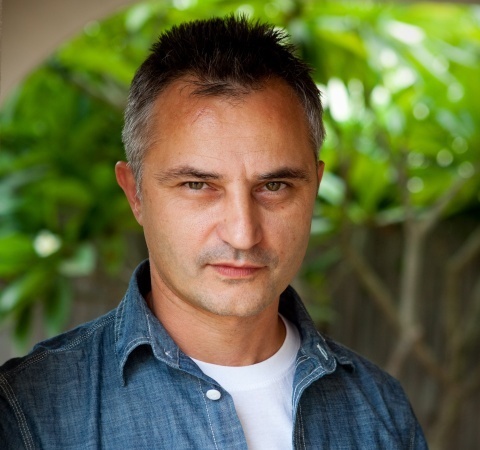 Zachary Karabashliev is a Bulgarian-born author, now living in the US. His debut novel, "18% Gray," (Ciela Publishers, 2008) published in Bulgaria in his native language is a bestselling title with 7 editions.

The book won the prestigious Bulgarian Novel of the Year Award given by Edward Vick Foundation, and was a finalist for the renowned literary biennial Elias Canetti Award. It was chosen by anonymous vote to be among the 100 most loved books by Bulgarians in the BBC campaign "The Big Read." His other book, "A Brief History of the Airplane" won the Book of the Year 2009 Award of Helikon. His play Sunday Evening won the most respected theatre award in Bulgaria – ASKEER 2009 and has a successful run in Sofia. His play Recoil is being also awarded as Best New Bulgarian Play, and is on stage in Sofia since mid-January.

He resides in San Diego, California with his wife and daughter.

The synopsis of the plot-driven literary fiction 18% Gray can be found after the interview.

The biography and the synopsis are taken from Karabashliev's official site with the author's permission. More on him and his work can be found here: http://www.18procentasivo.com/bio_en.html

Your first book "18% Gray" received the status of a true bestseller in Bulgaria. How does it feel to be famous?

Well, my wife and daughter still insist I take out the trash, do dishes and so on...

How much in the story is true? Have any of these things really happened? Do such things happen in America?

36.17% is true. 27. 65% is semi-true. 11.23% is semi-untrue. The rest is lies, lies, lies (laughs) Do such things happen? Stranger things have happened to me, I assure you -- in America, Bulgaria, France, Mexico, you name it. The scene, for example, in which the protagonist (intoxicated, yet Samaritan by heart) tries to save a stranger's life in Tijuana, but ends up almost getting killed DID happen in what is called real-life. Only it wasn't Mexico in the New Millennium, but Bulgaria in the 90-s, and the Mexican narco-thugs were Bulgarian mutras. I used that precious real-life experience as an inciting incident triggering the crazy journey of the main character. The love-story line is very true to life; the bag of weed story may or may not be true (laughs).

Ultimately, what makes a novel a novel is not what really happened, but how it is told, and how it connects with the reader. I'm not in the business of telling truths – you always have politicians ready to do that – I'm a student of storytelling. When I write, I'm not interested in telling you about my unique and true experiences, but in making them undoubtedly yours.

You books are written in Bulgarian. Do you write in English as well?

Bulgarian is my native language. For the stage and for the screen I write in English, since it is mostly dialogue. Some dialogue-driven short stories I also write in English. But, you see, I was 28 when I started studying this language, so English, compared to my Bulgarian, is pretty new to me.

How was the idea to write an American story meant for Bulgarian readers born?

As a kid I was deeply influenced by American literature in translation – Hemingway, Fitzgerald, Steinbeck, Jack London, Mark Twain, Robert M Pirsig, Salinger, Faulkner, Kerouac, and so on. So writing an American story to me was like going back to my "inner reader". Plus, a good story is a good story, and it doesn't really matter where it takes place – America, Bulgaria or the Moon. It translates.

Are your books going to be translated in English?

Some аrе already translated. My story "Metastases" (translated by Angela Rodel is shortlisted for the Dalkey Archive Collection "Best European Fiction". We'll see what happens. The good news is that "18%Gray" is coming out in French in May 2011.

Who is translating the book (s)?

Angela Rodel is my ideal English translator – American, living in Sofia. Her grasp on Bulgarian and her intuition for my words are phenomenal. It turned out we were born on the same date, so I guess we are astrology-related (laughs). Funny how Universe works, isn't it?

My French translator is the wonderful Marie Vrinat – she has translated the Bulgarian classics Yordan Yovkov, Yordan Radichkov, Pavel Vejinov, Victor Paskov, as well as the more contemporary Georgi Gospodinov, Teodora Dimova, to name a few. She has done great work for Bulgarian literature to reach French speaking readers. For which I'm deeply grateful to her.

How long have you lived in the US?

How was the decision to move to the US made? Any regrets?

For some unknown reason, ever since I remember myself, I have always known that I'd end up in America one day – one way or another. And it happened. No regrets.

Contemporary Bulgarians either worship America or hate it. As a 1st generation immigrant, I, myself, know America is neither paradise nor hell. What is it to you?

America is what it is. The only constant thing about America is that it is in a permanent state of change. America was, is, and should remain one of the greatest experiments in humanity. John Adams wrote to Abigail Adams in 1774 "We live, my dear soul, in an age of trial. What will be the consequence, I know not." And I love this about America. Yet, there is another side of America, the corporate America that I am concerned about. In its extremes it is anti-democratic and un-American. What totalitarian regimes managed to achieve with cruelty and state power, corporations now do with financial means – the killing of competition. A few corporations own the media in the US – just see how Clear Chanel works – 900 radio-stations all over the country, and they play the same 9 songs. Same goes for TV, the movie business, the newspapers, the whole Walmartization type of deal... This challenges the very core of America. And I'm not OK with America becoming anti-America in this very weird way.

Do you stay in touch with Bulgaria; do you keep informed about what is it going on here?

Always in touch. Perhaps, more than I should be.

I hear "18% Gray" is going to be made into a movie? Tell us a little bit more about this project? How far along is it? Who is writing the script?

It's in the earliest stage – development. I sold the book rights, and I was hired to write the screenplay. It will take a lot of work, but I'm ready.

A part writing books, what else do you do – is photography a hobby or a profession? Do you have other jobs in America?

I am a professional photographer, but I do it less and less. I consult the literary department of an independent film-production company (I read, comment on, write and co-write commercial scripts.) I also bartend a few nights a week – I love it, and I hope I never get tired of it. I write full time.

Are you writing something new? What is it?

Yes. I'm finishing a collection of short stories – I believe my best so far. And I am deep into research for my next novel for which I read obscure nonfiction books (thank God for Amazon) like a maniac. I just spent 4 days in a small college library in the Mid-West, going through a certain family archive, trying to read long hand written letters between a very interesting man and a very strong woman. Their life in letters, in your hands -- can you imagine? Something touching, something as real as this, you feel powerless, unworthy, you want to give up. I'll try not to. The novel will be based on real, historical figures from the end of 19th century. It will take place in America, Russia, France, England, Bulgaria and Istanbul of all places. I realize it sounds like an ambitious project, but I'm actually writing an intimate love story. The major events in the world at that time are just a background.

Stella's been gone nine mornings. Zack, her husband, is a thirty-something failed photographer, Bulgarian ex-pat, now living in California, and holding a 9-to-5 job in a pharmaceutical corporation. Devastated by his wife's leaving, he crosses the border into Mexico. There, he encounters a violent scene, and, trying to save a stranger's life, nearly loses his own. He manages to escape in his assailants' van and makes it back to the US, only to find a huge bag of marijuana in it.

Zack decides instead of clocking-in the next morning to use the unintentionally smuggled marijuana as a means to change his life. The fact of the matter is however, that he has never sold a single joint and has no idea how to turn weed into cash. The only man who can help him is Danny, a college friend, starving artist and small-time drug dealer in New York City. Danny arranges a meeting between Zack and a mysterious man who might be able to buy the marijuana wholesale.

Zack sets off for the East Coast with nothing but a large bag of cannabis and a vintage Nikon he salvages from a pawnshop. Through the lens of the old camera, he starts rediscovering himself by photographing an America we rarely see. His journey unleashes a series of erratic, hilarious, and life-threatening events. As he travels forward across country, the narrative slips backward in time to explore his obsessive romance with emerging artist Stella. The story shifts from present day California to Eastern Europe in the late eighties, where it runs through the nights of an anti-communist student campus occupation and continues with the young couple's exodus to Ohio. It flows briefly through France and climaxes in a contemporary loft high above Manhattan. There, Zack meets the enigmatic Boss, uncovers the story behind the bag of marijuana, and accepts the excruciating truth about the absence of Stella. Ultimately, he faces his biggest challenge – to find his true purpose in a world seemingly governed by chance.

The novel has a number of well-drawn comic characters who serve as Zack's allies and adversaries. The most notable is Danny, whose day job is bubble wrapping million-dollar works of art auctioned off at Christie's. Another one is Elijah Elli—an overweight redheaded vegan and unsuccessful screenwriter, obsessed with the idea of creating the perfect romantic comedy. The list carries on with characters such as Ken (the good friend from Ohio), Hito (the Japanese fashion photographer), Bernard (the pretentious French artist), and others.

18% Gray is a suspenseful, darkly funny love story with a solid literary flavor. It is written in raw, poetic, and short-breathed cin?ma v?rit? style. The ending, twisted but inevitably logical, takes the reader back to the beginning.