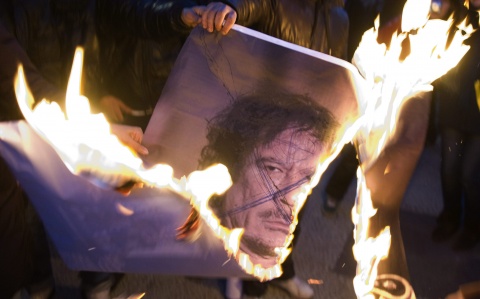 Protesters burn a photo of Libyan Leader Muammar Gaddafi during a rally organized by Amnesty International Switzerland on the Federal Square in Bern, Switzerland, 23 February 2011. Photo by EPA/BGNES

Misurata is now in the hands of the opposition, who have driven out the mercenaries, according to witnesses and multiple media reports.

The opposition also controls the second-largest city of Benghazi, where crowds cheered as international journalists drove through the city and the only shooting that could be heard was celebratory gunfire.

"When they saw us arrive, they just exploded with cheers and clapping, people saying "thank you, thank you" in English. Throwing candy and dates inside the car," CNN's Ben Wedeman told AC360.

"It was just this incredible welcome that really drove home the point that these people are desperate for the world's attention, desperate to get their stories out," said Wedeman, the first Western television correspondent to enter and report from Libya during the crisis.

But the capital, Tripoli, was a different story. Sounds of gunfire erupted at dawn Thursday as chanting crowds fled.

"There's nobody walking in the street, nobody is trying to get out, even to look through the window," a resident who did not want to be identified for security reasons told AC360. "It's a little scary."

The caller said she is risking her life by talking to the media.

"I've been trying to keep my identity hidden," the woman said. "There are reported kidnappings happening in homes for anybody credible that is talking to the media and giving them the truth about what's happening in Libya."

The overall death toll so far has been impossible to determine. Human rights groups say they have confirmed about 300 deaths, though witnesses suggested the number was far larger.

Ibrahim Dabbashi, Libya's deputy ambassador to the United Nations, has said the death toll could be as high as 800. And in a speech to senate, the Italian foreign minister placed the toll as high as 1,000 deaths, citing unconfirmed reports.