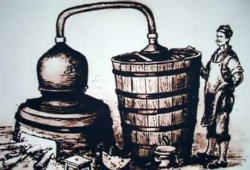 Bulgaria will try to patent its traditional "grape Rakia" alcoholic beverage in the European Union, the Agriculture Minister Miroslav Naydenov has announced.

"Getting the patent recognized should be a national clause," Minister Naydenov declared. A report has been prepared by his Ministry, proving the Bulgarian  beverage is produced in a unique fashion.

"The process of registering the patent is long and difficult, that is why it should have started in 2006," Naydenov stated on Wednesday.

Patenting of the alcoholic beverage would lead to the opportunity for Bulgaria to impose excise tax on rakia which is 50% of regular rates. This would cut the price of a liter grape Rakia with about BGN 2, the Minister of Agriculture has clarified .

Furthermore, the move is expected to lead to a curb in illegal production, and thus greater revenue for the state.

Rakia is a strong alcoholic beverage is produced by distillation of fermented fruit. It is a popular beverage throughout the Balkans, but with specific variations in each country. Its alcohol content is normally 40% ABV, but home-produced rakia can be stronger (typically 50% to 60%).

In Bulgaria, grape Rakia is traditionally consumed with Shopska salad. On Wednesday, Minister Naydenov admitted before the media that he also enjoys the combination.