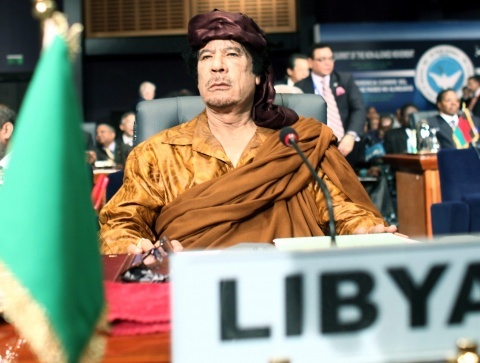 Colonel Gaddafi is the Arab world's longest-serving leader, having ruled the oil-rich state since a coup in 1969. Photo by EPA/BGNES

Gaddafi, Libya's strongman ruler, is not only a mercurial, eccentric and egomaniacal buffoon, but also a firm master of his regime and excellent manipulator, according to US diplomatic cables, revealed on WikiLeaks.

Gaddafi "remains intimately involved in the regime's most sensitive and critical portfolios," Ambassador Gene A. Cretz wrote in a Jan. 28, 2009, cable to the State Department in Washington, as cited by the Washington Post.

He said the Libyan ruler's "mastery of tactical maneuvering has kept him in power for nearly 40 years."

"The reality is that no potential successor currently enjoys sufficient credibility in his own right to maintain that delicate equilibrium," Cretz wrote. Gaddafi, he added, "is the architect of his own gilded cage and cannot yet relinquish day-to-day decisionmaking, even if he wants to."

While Gaddafi likes to portray himself to his people as "an oracle above the fray" in Libya's opaque governing structures, in reality he personally vets all government contracts above 0 million, handpicks officials throughout the bureaucracy and is generally well-versed in the minutiae of domestic and foreign policy, the cables assert.

Gaddafi's multifaceted personality was on full display during an Aug. 14, 2009, meeting with a US congressional delegation. The lawmakers, led by Sen. John McCain (R-Ariz.), were summoned to Gaddafi's opulent tent at 11 p.m. The Libyan "appeared as if he had been roused from a deep slumber" and showed up with "rumpled hair and puffy eyes," according to a diplomatic cable summarizing the encounter. Wearing wrinkled pants and "a short-sleeved shirt patterned with the continent of Africa," Gaddafi's mercurial side seemed be in control.

But, the cable reported, Gaddafi "was lucid and engaged throughout the meeting," exhibiting a command of the issues at hand and a diplomatic manner. When his son Muatassim, who serves as his national security adviser, tried to interrupt the U.S. lawmakers, Gaddafi "shushed" him and bade the visitors continue.

The cables present in details Gaddafi's eccentricities. A September 2009 embassy missive to Secretary of State Hillary Rodham Clinton noted that Gaddafi was no longer constantly accompanied by his "legendary" band of female bodyguards. Instead, he had become more heavily dependent on his Ukrainian nurse, a "voluptuous blonde" named Galyna, who traveled with him everywhere.

Gaddafi has a phobia about flying over open waters and fears staying on the upper floors of hotels when traveling abroad, the cables reveal.

The cables often deal with Gaddafi's health and personal appearance.

A June 16, 2009, cable discussed speculation that Gaddafi had throat cancer and diabetes but dismissed the reports as "unreliable." It did conclude that he was a "hypochondriac" who ordered that all his physical exams be videotaped so he could review them with a variety of trusted doctors.

The same cable said some of Gaddafi's health problems could be attributed to his "extremely vain" personality. While some sources in Tripoli had whispered to embassy officials that Gaddafi's loss of control of his facial muscles was evidence he had suffered a stroke, others rejected that analysis, saying it was merely the result of excessive Botox treatments.

In addition, Gaddafi's scraggly hairline was blamed on a botched hair implant sometime in 2008 or 2009. The cable explained that he "suffered a rare auto-immune reaction to the procedure and the plugs had to be removed."

As for his eight children, they can hardly be said to enjoy the comforts of their influential positions.

"Gaddafi has placed his sons," Cretz wrote in a November 2009 cable, "on a succession high wire act, perpetually thrown off balance, in what might be a calculated effort by the aging leader to prevent any one of them from authoritatively gaining the prize."