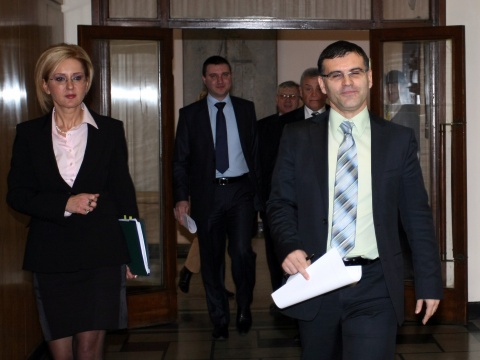 Bulgarian Finance Minister Djankov (right) with his deputies Pencheva (left) and Goranov (back) on their way to present the proposed Financial Stability Pact. Photo by BGNES

Bulgaria's Finance Minister Simeon Djankov plans to dedicate all of his efforts to the passing of Constitution amendment guaranteeing stable state finances, known as the "Financial Stability Pact."

The measures termed "Financial Stability Pact" were first announced by Djankov on February 8 at a lecture at the New Bulgarian University in Sofia following the US tradition in which crucial policy speeches are delivered at academic institutions.

On Tuesday, Djankov and his two deputies Vladislav Goranov and Boryana Pencheva provided further details about the provisions of the Financial Stability Pact.

Djankov himself declared that he will focus on the Pact in the next few months, and will not be dealing with his original top priority – Bulgaria's bid to join the ERM II and the euro zone – until the Financial Stability Pact is not adopted.

The three main pillars of Djankov's Financial Stability Pact to be solidified via Constitutional amendments are introducing a limit to allowed budget deficit, restricting the ability of the state to redistribute public funds as a percentage of the GDP, and introducing a qualified majority vote of two-thirds of the votes in Parliament to change Bulgaria's direct taxes.

The Finance Minister thus gave up on his controversial and much criticized idea that provided for making changes to tax rates only after a referendum.

Djankov first mentioned his plan for Financial Stability Pact during the Parliament debate on the government's confidence vote several weeks ago. The idea for legally-binding restrictions of state finances was earlier put forth by the rightist Blue Coalition, which occasionally supports the measures of the ruling center-right party GERB and the Borisov Cabinet but is also often highly critical of them.

Djankov's Financial Stability Pact is expected to enter into force as of January 1, 2013, several months before the expiration of the four-year term of the Borisov Cabinet and before the regular parliamentary elections provided that the government serves its full term. This means that the Pact, if approved, will be in force for those ruling Bulgaria after the present Cabinet of Boyko Borisov.

The Financial Stability Pact and the so called "fiscal board" that it stipulates will help Bulgaria to join the euro zone, the Finance Minister pointed out, while explaining that he will not be pressing for accession to the euro zone waiting room, ERM II, for the time being.

He has not commented on whether the proposed Constitutional amendments change Bulgaria's state structure since they will prevent the citizens from selecting among political forces with differing financial visions.

Bulgaria is already restricted with respect to its state finances by the Stability and Growth Pact of the EU, which requires that the budget deficit be below 3% of the GDP. Djankov has pointed to the example of Germany, which in 2009 adopted a constitutional amendment restricting the budget deficit to enter into force in 2014. The Bulgarian fiscal board, however, will be much more comprehensive.

Its first measure provides for banning the government from redistributing more than 37% of the GDP, without factoring in Bulgaria's contribution to the common EU budget, and all state expenditures on EU funding such as national co-funding of programs and projects.

The Finance Minister pointed out that the in past 15 years, Bulgaria's governments have redistributed sums equaling between 36% and 41% of the GDP, while the current government's spending were between 35% and 36% of the GDP.

The second measure refers to the budget balance, with the maximum allowed budget deficit being 3% of the GDP. However, the Finance Ministry has crafted a detailed set of rules which account for periods of economic growth or downturn.

Thus, in the event of positive economic growth, if the public debt is between 20% and 40% of the GDP, 40% being the maximum allowed, the Council of Ministers will be entitled to propose improving the budget balance by at 37% of the projected GDP growth. If the state debt is below 20% of the GDP, the proposed improvement of the balance can be below 37% of the projected GDP growth.

In the event of an economic downturn, the government will be allowed to propose worsening the budget balance by up to 37% of the projected GDP decline if this does not go beyond a deficit of 3% of the GDP, and if the funding of the deficit with public debt will not lead to its going over 40% of the GDP.

The government plan also provides for a special mechanism in case of emergency situations such as natural disasters that can affect substantially the national economy. The emergency mechanism is also designed to keep the budget deficit below 3%.

The third measure states that changes of the direct taxes can be adopted only by a qualified majority vote, with 2/3 or 160 out of a total of 240 MPs required to vote in favor.

Djankov believes that the proposed measures will "cement" Bulgaria as having one of the strictest fiscal policies in the European Union, and will be supported by both the rightist and the center-leftist opposition. The draft Financial Stability Pact was presented to the chairs of all parliamentary groups.

It is highly doubtful whether Djankov will be able to get his fiscal board through. In order to amend the Constitution, the Borisov government will need to have three-fourths of the MPs, or 180 MPs, to vote in favor of the motion in three different votes. It is still unclear if the Cabinet stands a decent chance of muster enough votes to get the Djankov plan through since the ruling party GERB and its allies from the nationalist party Ataka have a total of 137 votes.

The opposition in the face of the Bulgarian Socialist Party and the ethnic Turkish party DPS has a total of 76 MPs, which is enough to block the motion.

"The Financial Stability Pact is the most important topic for the state finances and if this idea is successful in Bulgaria, it can be adopted by other states as well," he has stated while also saying that every "soberly thinking" Member of Parliament should support the proposed measures.

Djankov further declared his hopes to "export" the Financial Stability Pact idea to other EU countries once the measures are adopted and proved to be feasible in Bulgaria. Djankov, a former senior World Bank economist, is a globally renowned economic scientist.

"The path toward the eurozone will be easier, because we will be able to show that the fiscal discipline is not only now, but that it will be maintained over time," Simeon Djankov told Bloomberg agency in Brussels last week. "It is an independently good policy to have, but it certainly will help us in the drive for the euro."

Bulgaria's center-right government had revived at the end of last year its plans to apply to join the bloc's exchange-rate mechanism, the so-called euro zone waiting room, after it was forced to drop the euro bid in April over a larger than expected 2009 deficit. Countries must be members of ERM II for two years before they can formally join the euro zone. The Bulgarian lev is already linked to the euro in a currency board that keeps the Bulgarian currency at 1.9558 to the euro.

Latest data has showed that Bulgaria registered a budget deficit of 3.9% in 2010 instead of the forecast 4.8%. Bulgaria's deficit under the consolidated fiscal framework on cash basis was BGN 2.8 B in 2010, or 3.9%. The accrual deficit, which is measured according to EU accounting rules, was 3.6%. According to Bulgaria's revised 2010 State Budget Act approved in June, the expected 2010 budget deficit was 4.8%, or BGN 3.691 B.

Bulgaria has the lowest personal and corporate income tax in the EU at 10%, which was introduced at the beginning of 2008, replacing the previous system, which combined several different tax rates - between 20 and 24%, depending on income.

Bulgaria also has the lowest social security rates, which coupled with a 10% flat rate, makes it very attractive for physical entities, employers and potential investors.