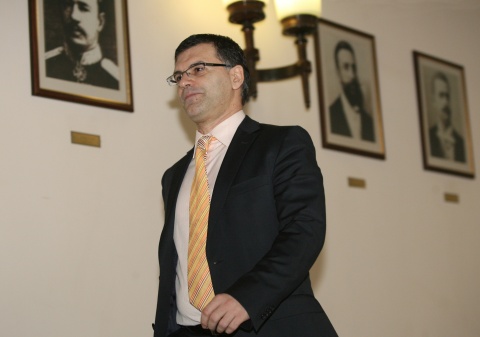 Bulgaria's Finance Minister Simeon Djankov will officially present on Tuesday before the media his proposal for constitutional changes, which aim at guaranteeing the state's financial stability.

The three main pillars of Djankov's project, entitled "Financial Stability Pact" which he aims to  solidify via Constitutional amendments, are introducing a 3% limit to allowed budget deficit, restricting the ability of the state to redistribute public funds up to 37% of GDP, and introducing a qualified majority vote of two-thirds of the votes in Parliament to change Bulgaria's direct taxes.

The measures were first announced by Djankov on February 7 at a lecture at the New Bulgarian University in Sofia.

The Finance Minister has given up on his controversial and much criticized idea that provided for making changes to tax rates only after a referendum.

In order to amend the Constitution, the Borisov government will need to have three-fourths of the MPs, or 180 MPs, to vote in favor of the motion in three different votes. It is still unclear if the Cabinet stands a decent chance of muster enough votes to get the Djankov plan through since the ruling party GERB and its allies from the nationalist party Ataka have a total of 137 votes.

The rightist Blue Coalition, however, has stated it will support curtain government policies.