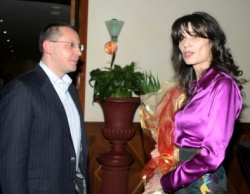 Bulgaria's former PM, Sergey Stanishev, with Monika Yanova, during the official launch of her PR agency in 2008. Photo by Slava.bg

Bulgaria's former Prime Minister and leader of the opposition Bulgarian Socialist Party, Sergey Stanishev, is going to become father at the end of this spring.

Stanishev has confirmed the information for his fellow party members, saying he could not wait to begin changing diapers for the baby girl.

This will be his first child, and the third for the mother. Monika already has two children by banker, Ventsislav Yosifov, whom she divorced last summer. The process has been very discrete and did not make headlines until now despite long-running rumors about a love relationship between the BSP leader and the PR expert.

According to 24 Chassa, the future parents still live separately because Monika wants her children to become accustomed to Stanishev's presence first.

The now PR expert met the banker through her work as a reporter for 24 Chassa. She was 26 at the time.