Bulgaria Braces for Influx of Migrants after Arab Turmoil 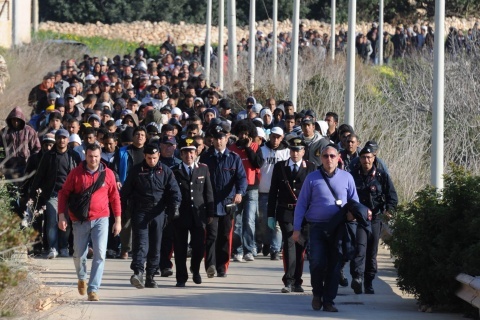 Would-be migrants from Tunisia arrive at the refugee camp on the southern Italian island of Lampedusa, Italy, 13 February 2011. Photo by EPA/BGNES

The situation in the Arab world will most likely lead to an increased immigrant pressure on the Bulgarian borders, the country's Interior Minister Tsvetan Tsvetanov said Tuesday.

"Two new asylum centers in Lyubimets and Pastrogor are ready, but should the immigrant pressure increases, we have discussed other measures, too," Tsvetanov clarified before the Bulgarian National Television.

Last week, Bulgarian experts called on the government and the European institutions to brace for a large influx of migrants due to turmoil in the Middle East, warning the continent's policies on immigration and the world's fledgling anti-smuggling efforts will be put to the test.

On Saturday, the European Union sent a team of border experts to Italy to help process the flooding of refugees from Tunisia triggered by pro-democracy protests that toppled President Zine El Abidine Ben Ali.