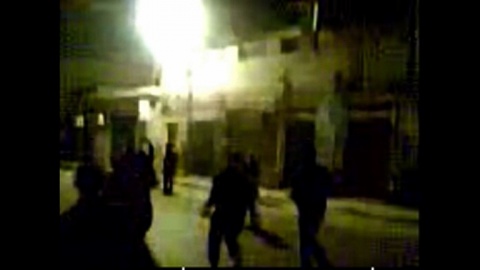 Libyan dictator Muammar Gaddafi is employing fighter jets to bomb civilians protesters of his regime around the capital Tripoli.

Military planes and helicopters have wrought havoc around the Libyan capital as the 40-year-old dictatorship of Gaddafi is struggling for survival against the massive pro-democracy wave rapidly taking over the country in a follow-up of the revolutions in its other Arab neighbors Tunisia and Egypt in the recent weeks.

Al Jazeera has cited witnesses as saying that the military planes and helicopters continue to bomb the protesters targeting anything that moves, be it a person or a car, in the vicinity of the Libyan capital.

Meanwhile, two Libyan fighter jets with a total of four crew members have landed in Malta as the crews fled a Libyan military base in Benghazi, 1 000 km east of Tripoli, allegedly because they refused orders to bomb protesters. Two civilian helicopters with seven French citizens, who worked on an oil platform, also arrived in Malta seeking asylum.

Benghazi, the second largest city in Libya is reported to have been taken over by protesters, after the same developments occurred a couple of days ago in the third largest city in the country Al Bayda.

Reacting to the arrival of fighter jets and helicopters in Malta Italy has declared a maximum alert level for its air force, the ANSA agency reported.

According to various sources, between 160 and 400 people were killed in Libya on Monday in clashes between the protesters and the forces of the regime.

In a militant TV address earlier on Monday, Gaddafi's son Seif al-Islam refuted allegations his father had fled to Venezuela, and declared that the regime will fight "to the last bullet."