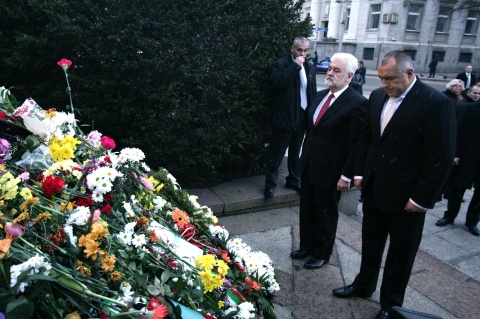 Serbian Prime Minister Mirko Cvetcovic has made a seemingly half-hearted declaration coming short of an actual apology for the incident in which Serbian authorities obstructed the remembrance of Bulgarian national hero Vasil Levski by the ethnic Bulgarians in the country.

Late on Monday the Prime Ministers of Bulgaria and Serbia declared their joint will to find ways to overcome the effects of the case described as Borisov as a "misunderstanding or a conflict."

Later Monday night, however, Borisov and Cvetcovic together laid flowers at the monument of Vasil Levski in downtown Sofia, apparently as a gesture of conciliation on part of the Serbian government.

"Vasil Levski is the national hero of Bulgaria but he fought for the freedom of all Balkan states. I am convinced that with you, Mr. Cvetkovic, we will find the form with which to clear out this misunderstanding or conflict if you wish, because Bulgaria and Serbia have really a lot of work on the way to European integration, the development of our region, the infrastructure projects, the gas interconnection. This is why we cannot afford to spend so much energy on things that bring us back in the past," Bulgarian Prime Minister Boyko Borisov told his Serbian counterpart in Sofia, according to the government press center.

Borisov said he was sorry that Cvetkovic's saw civil protests but expressed his confidence that the two Prime Ministers together can "extinguish the discontent of the Bulgarian citizens."

"I totally understand your feelings and not just yours but also the feelings of the Bulgarian people when we talk about a person like Levski. I would like to say that the entire Balkans are proud of him. He is a hero and Serbia just as much as you is proud of him. In this context, I would like to underscore that the intention of the Serbian authorities and the Serbian government was never to ban this remembrance ceremony in his honor. I think that we will best settle this unpleasant incident, as we agreed, if we together pay our respects to this great hero of yours," Cvetkovic told Borisov.

The protests in Sofia against Serbia's obstruction of the Vasil Levski remembrance in Bosilegrad actually focused on the situation of the Bulgarian minority in the country. This is the second time the Borisov Cabinet in Bulgaria faces protests on this issue, and demands that it act to provide some protection to the Bulgarians in Serbia.

Ethnic Bulgarians from Bosilegrad as well as members of otherwise antagonistic nationalist formations in Bulgaria such as Ataka and the opposing factions of VMRO – VMRO-BND and VMRO-NIE - came together Monday afternoon protesting against the visit of Cvetcovic before the Council of Ministers where the Serbian PM was being received by Borisov. They demanded an outright apology from Serbia for the actions of its authorities.

The banners of the protesters read slogans such as "This Serbia – Never in the EU!", "No to the Serbian Terror", "Your brotherly Serbia unconditionally banned us from honoring Vasil Levski at his monument in Bosilegrad", "Are you MPs or are you trash?", "The Western Outlands (i.e. the Bulgarian-populated regions of Serbia – editor's note) have nothing to do with Serbia", "We are sick and tired of Serbia's chauvinism and Bulgaria's nihilism".

The VMRO-BND party raised demands for reviewing the legal status of the so called "Western Outlands" - the Bulgarian-populated border regions of Serbia, which Bulgaria was forced to cedeto Yugoslavia under the Treaty of Neuilly of 1919, the Bulgarian version of the Treaty of Versailles, after World War I.

The VMRO-BND party went as far as insisting that the "Western Outlands" should gradually be reincorporated into Bulgaria as the Treaty of Neuilly should have been revised a long time ago.