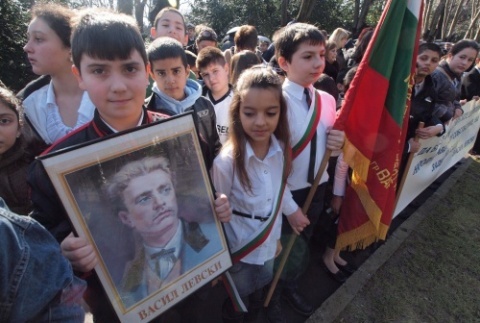 Bulgarians from around the world honored Saturday the memory of Vasil Levski, the Apostle of Freedom, 138 years after his execution by Ottoman authorities. Photo by BGNES

Serbian authorities did not lift a ban to officially commemorate the anniversary of Bulgarian national hero Vasil Levski on the day Bulgarians remember his tragic death in 1873.

Saturday there was a massive police presence in the eastern town of Bosilegrad, which is one of the centers of the ethnic Bulgarian population in Serbia, and where large-scale Levski commemorations traditionally take place.

People wishing to pay homage to Levski were not allowed to do so in public, but had to gather in the Cultural Center of the Bulgarian community.

This has only intensified tensions in Bosilegrad, a town of overwhelmingly ethnic-Bulgarian population which has frequently been subjected to similar repression at the hands of authorities.

Over the week, an order was issued by the Serbian Ministry of Interior banning official commemorations of Levski as dangerous to public order and safety.

All through Friday and Saturday, Serbian border authorities have been creating unusual hassles for Bulgarian nationals desiring to travel into Serbia.

Bulgarian Minister of Foreign Affairs Nikolay Mladenov has expressed his anger at the events and vowed to address the matter to the sitting of EU Foreign Affairs Ministers on Monday.

A note of protest has been presented to Serbian ambassador in Sofia Alexander Crvenjakov.

Vasil Levski (1837-73), the greatest fighter for the liberation of Bulgaria from the Ottoman Empire, was hanged by Ottoman authorities for organizing a network of secret revolutionary committees across the country.

He lived in Serbia while he was a part of a combat unit trained to fight to free Bulgaria - and aid Serbia in case of a war with the Empire.

Levski was inspired by the freedom struggles of fellow Balkan peoples like Serbia and Greece, and unlike many of the national liberation leaders at the time, his political ideas were free of all nationalism.