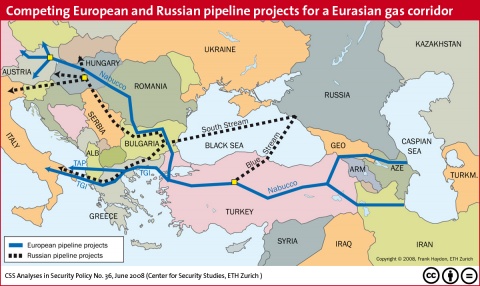 This map by the Center for Security Studies, ETH Zurich, shows why the merger of Nabucco and ITGI - at least on Turkish territory - might make sense. Map by sta.ethz.ch

The European Union is moving to secure a merger of two future gas transit pipeline projects - Nabucco and ITGI (Interconnector Turkey-Greece-Italy) - in order to guarantee the natural gas supplies from Azerbaijan to Europe.

The move is intended to consolidate EU's strategy to start tapping into the natural gas reserves of the Caspian Sea thus reducing its dependence on Russian energy.

Azerbaijan has already committed to provide gas for the EU via Nabucco and the so called Southern Gas Corridor. However, the ITGI pipeline and that Trans-Adriatic Pipeline (TAP) are also expected to transport Azeri gas.

Officials at the European Commission are urging ITGI and Nabucco to enter talks about merging their operations, European media reports say.

The anonymous sources have indicated that, should such a merger come through, this could mean realizing first the cheaper ITGI project in a "Southern Corridor Phase I" to carry gas from Azerbaijan via Turkey to Greece and Italy, and then branching north according to the original Nabucco route plans from Turkey to Bulgaria, Romania, Hungary, and Austria.

Nabucco Gas Pipeline International GmbH spokesperson Christian Dolezal has commented that there are political discussions of this option but that the Nabucco consortium is not involved in any talks.

In June 2011, the consortium that manages the large Azerbaijan gas field Shah Deniz 2, is expected to decide who exactly the natural gas from it will go to.

In January 2011, the EU made a "breakthrough" deal with Azerbaijan on the supply of natural gas to the Union from the Caucasus country and on the development of the so called Southern Gas Corridor with several major pipelines including Nabucco.

The President of the European Commission Jos? Manuel Barroso and the President of Azerbaijan Ilham Aliyev signed in Baku a Joint Declaration on gas delivery for Europe.

Under its terms, Azerbaijan for the first time commited in an official written document to supplying substantial volumes of gas over the long term to the European Union, while Europe provides access to its market for them.

The Joint Declaration has been described an important step in the realization of the so called Southern Gas Corridor, the route expected to bring Caspian Sea and Central Asian gas to the EU, and the diversification of Europe's energy supplies.

The Southern Gas Corridor entails the construction of several pipelines, such as Nabucco (running from Turkey to Austria and Germany via Bulgaria, Romania, and Hungary), ITGI (Interconnection Turkey-Greece-Italy), White Stream (known also as the Georgia-Ukraine-EU pipeline) and TAP (the Trans-Adriatic Pipeline), aiming to bring gas from the Caspian Sea to Europe.

Back at the time of Barroso's visit in Baku, the EC pointed out that Nabucco aims to bring gas to the border of Europe with a brand new pipeline, whereas TAP and ITGI require the strengthening of existing infrastructure in non-EU countries; it also stressed that in the coming months Azerbaijan will make a further decision on which of these pipelines to prioritize.

Shah Deniz II is expected to add roughly 16 billion cubic meters natural gas to Azerbaijan's  production, 10 bcm of which would be ready for export to the EU. BP and Statoil each own 25.5% stakes of Shah Deniz. The State Oil Co. of Azerbaijan, or SOCAR, OAO Lukoil Holdings of Russia, France's Total SA and National Iranian Oil Co. all own 10% each, while Turkey's TPAO owns 9%.

Azerbaijan has thus emerged as the first major natural gas supplier for the EU from the Caspian Sea region, thus providing for lessening the 27-nation bloc's dependence on gas imports from Russia.

The several pipelines from the Southern Gas Corridor, which provides an untapped natural gas supply route for the EU circumventing Russia, will supplement the existing gas supplies that the Union gets through pipelines from from Russia, Norway and North Africa, most notably Algeria.

The Southern Gas Corridor appears to be especially important for EU countries such as Bulgaria, which get the overwhelming share of their natural gas from Russia. The Russian gas supplies to Europe were disrupted on two occasions in 2006 and 2009 because of disputes between Gazprom and Ukraine, which is a major transit country.

Azerbaijan, together with Iraqi Kurdistan, will be the major initial supplier of natural gas for the Nabucco gas transit pipeline.

Reports have indicated that for the time being the ITGI pipeline might be better positioned to receive preference from Azerbaijan for the supply of natural gas; this could be the major reason the EC might have moved to urge the merge of ITGI and Nabucco.

While Bulgaria has been a very active promoter of Nabucco, it has also established relations with the management of the ITGI and is expected to receive gas through this project.

Greek natural gas monopoly DEPA and Italian Edison SpA, which manage the ITGI, have also offered supplies to countries north of Greece. The project will start with Bulgaria - the IGB pipeline (Interconnection Greece-Bulgaria) that will be meet the ITGI at the city of Komotini and after 170 km will reach Stara Zagora. The Bulgarian Energy Holding first signed the deal with DEPA and Edison in July 2009.

The "Poseidon" (DEPA-Edison) mixed company has undertaken the construction and operation of the IGB on Greek soil. At the beginning of December, the Articles of Association and the agreement of the company's shareholders for the entire pipeline in which the Bulgarian Energy Holding and Poseidon participate by 50% each, was signed in Sofia. After the creation of the IGB business venture, a tender for the pipeline's detailed study was announced, with February 12th as deadline for the submission of offers.

The EU also supports the IGB project with a contribution of approximately EUR 45 M, whereas its operation will constitute the first step for the creation of similar small, relatively cheap interconnectors between Bulgaria-Romania and Romania-Hungary. Through them, the gas that reaches Greece through the ITGI or other sources (e.g. liquefied), will supply the networks of three countries north of Greece, thus reducing their dependence on Russian gas. The Southern Corridor pipelines will be used for this goal.

The Nabucco consortium, Nabucco Gas Pipeline International GmbH has formally refuted the information on the potential merging of the Nabucco and South Stream projectsMeanwhile, stemming form a throwaway remark by the US ambassador to Italy, David Thorne.

Nabucco and the Gazprom-sponsored gas transit pipeline have been widely considered rival projects, with EU Energy Commissioner Guenther Oettinger formally admitting in November 2010, the first such admission by an EU institution, that the two pipelines are competitors.