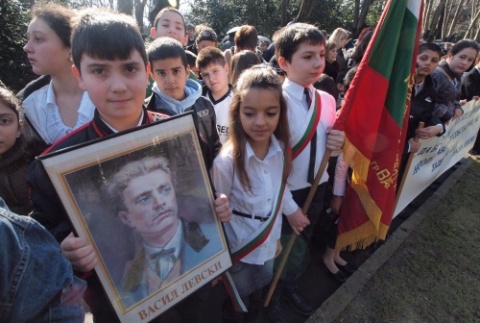 Bulgarians from around the country will honor Saturday the memory of Vasil Levski, the Apostle of Freedom, 138 years after his hanging by the Ottoman authorities. Photo by BGNES

Serbian authorities have blocked the "Oltomantsi" checkpoint on the Bulgarian border in order to stop people with Bulgarian origin to enter the country.

The news was reported by the private TV channel bTV Friday morning. Bulgarians gathered at the checkpoint have been told they must wait, but no one has informed them about the reason or when the checkpoint will reopen.

The Bulgarians who have arrived at "Oltomatsi" are trying to reach the town of Bosilegrad to lay a wreath at the monument of Bulgaria's national hero and revolutionary, Vasil Levski.

On Saturday, February 19, Bulgarians will mark the 138th anniversary of Levski's hanging, after being sentenced to death by an Ottoman court.

There is increased police presence at the checkpoint with about 50 armed police arriving early morning in a bus, according to bTV.