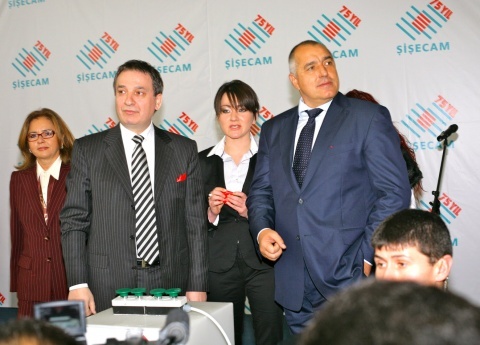 On February 7, 2011, Sisecam Board Chair and Managing Director Ahmet Kirman inaugurated together with Bulgarian Prime Minister Boyko Borisov the "Sisecam" factory for automobile glass in the northeastern city of Targovishte. The brand-new investment is estimated at USD 25 M and will provide work for 130 people.

However, the total investment of Sisecam in Bulgaria's Targovishte through its subsidiary Trakiya Glass Bulgaria amounts to some USD 400 M; it employs 1 500 workers in Bulgaria. Kirman and the other managers of the Turkish glass giant have made it clear that they plan to build four more plants or production lines in Targovishte worth another USD 400, and to have a total of 2 500 workers in the Bulgarian city if the Bulgarian government meets their requests for tax breaks.

Kirman told Novinite.com (Sofia News Agency) that Sisecam is not at all concerned by the potential appearance of a glass producing competitor in Northeast Bulgaria, in the city of Razgrad, which is only 30 km away from Targovishte, in the face of the Chinese state-owned company China Luoyang Float Glass Group.

China Luoyang Float Glass Group first declared its interest in in investing in the former glass factory in Bulgaria's northeast city of Razgrad in 2008, and while the investment has not gotten through yet, it remains highly likely that it will be realized.

In April 2008, the Vice President of CLFG, Li Wei, announced the Chinese holding was going to invest at least EUR 80 M in the former "Diamond" factory in Razgrad, which was shut down in 2000 over financial troubles. In 2007, its assets were bought by the Plovdiv-based firm Via Properties, with which the Chinese company is planning the investment.

CLGF is a state-owned company, and ranks third largest in the world in production of flat glass. The plant in Razgrad is expected to employ 300 wokers.

Should the Chinese investment in Razgrad become a fact, there will be two large-scale foreign-owned glass producers in Northeast Bulgaria, which could lead to competition for both European markets and local labor. Turkey's Sisecam appears to be in a stronger position since it already has a strong foothold in the region, and its existing and planned investments appear to be much more massive.