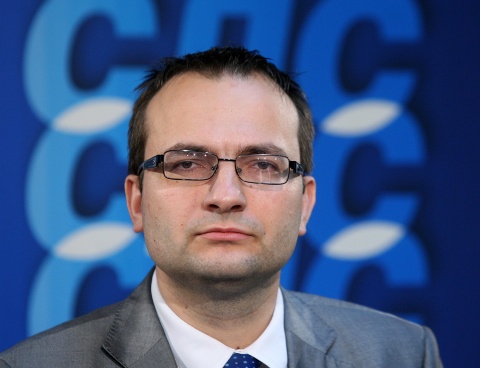 Martin Dimitrov, co-leader of the Blue Coalition. Photo by BGNES

Tsvetlin Yovchev submitted his resignation earlier on Wednesday, asking Borisov that he is dismissed from office due to the government's consistent lack of trust in his skills. The reason is the recent scandal which involved leaked conversations between senior government officials and Customs Office chief Vanyo Tanov.

The responsibility for the recent leak of discrediting phone conversations between high officials must be taken not only by DANS, but also by the Interior Ministry, according to Martin Dimitrov, co-leader of the Blue Coalition.

Meanwhile, Volen Siderov, leader of the far-right Ataka (Atack) party, has declared that Yovchev's resignation is a mistake, since he has carried out important reforms and has coped decently with his job. Ataka is the closest ally of Boyko Borisov's GERB, while the Blue Coalition has grown increasingly reserved towards the fovernment.

Earlier on Wednesday, before Yovchev's resignation, Borisov said he would execute changes in DANS without hesitating if its leadership fails to provide security of information and to stop the scandalous leaks of classified information.