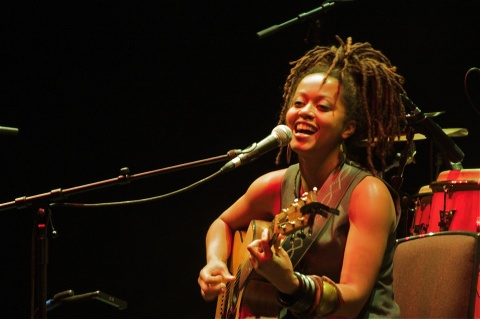 Sara Tavares will stage her second concert in Bulgaria on May 14 after performing for the first time in June 2009. Photo by BGNES

Portuguese singer Sara Tavares has announced that her second concert in Bulgaria will be staged on May 14.

The concert, organized by the Bulgarian producing company "BG Sound Stage", in cooperation with the Portuguese Embassy to Sofia, was initially scheduled for November 2010, but was postponed.

In February 2010, Tavares underwent a surgery for removing of brain tumor and canceled all her professional engagements for an undefined period of time.

However, she has recovered and is back on the road. The singer's gig in Sofia will be part of her tour "Xinti", which presents her last album.

The concert in May would not be Tavares's first performance in Bulgaria. Her first ever concert in Sofia was on June 26, 2009 in the Bulgaria Hall.

The 33-year-old singer, guitarist and percussionist was born and raised in Lisbon, Portugal. She is a second-generation Portuguese of Cape Verdean descent and she composes African, Portuguese and North American influenced world music.